Apple has announced a reduction on the retail price for its entire Macbook Air range for the South African market. This offer extends to both the 2014 and 2013 models as well as the 13" and 11" size variants, effective immediately. The new deal will be run by Apple's local retail partners such as Digicape and iStore, along with select authorised Apple resellers.

This will now see the bottom of the range 2013 11" MacBook Air (128 GB) model going for R12 000 and the top tier 2014 13" MacBook Air (256 GB) set to cost consumers R17 600. For the latter, that is a drop in price of roughly R400, with the entire range of MacBook Airs receiving similar treatment. For a comprehensive list of all authorised Apple retailers who will be running this new deal, click here. 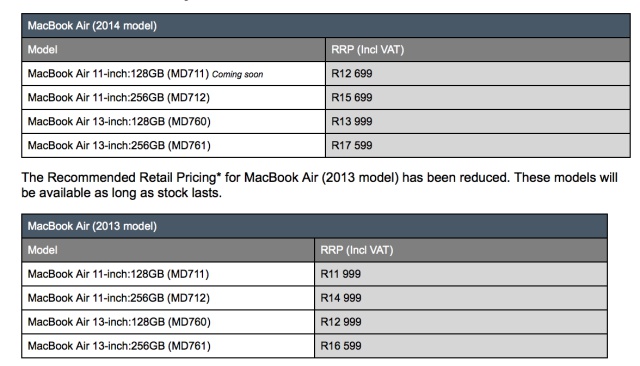 The news that Apple was lowering the retail prices for its entire MacBook Air range, both 2014 and 2013 models in the US and EU regions, garnered a fair amount of buzz. This was partly down to the fact that Apple's annual Worldwide Developers Conference (WWDC), taking place from 2-6 June, always coincided with some tasty new product releases and refreshes.

So the drop in price naturally began stirring around rumours that new lineup of 2015 MacBook Airs would be showcased, to date however there has been no real evidence to support such claims. But you can be assured that TechSmart will give a full rundown of what the upcoming WWDC yields.