First seen at MWC 2015 back in March, BlackBerry has now brought its mid-range Leap smartphone to South Africa. Upon its unveiling earlier in the year, BlackBerry billed it as a device for young professionals, or "Start-ups" as they termed it.

Now, three months later the message has not changed with users aiming to make the move from a more basic device, like BlackBerry's Z3 (Review) for example, to a mid-range unit that ticks all the necessary boxes. Added to that, BlackBerry has added a number of enterprise-specific features to the Leap, to make it better suited to the rigours of work.

BlackBerry Blend is one such example, designed to give users a dedicated desktop client to work on, and ultimately be more productive, according to the Canada-based company. One other area BlackBerry was quick to highlight, is the Leap's 2800 mAh battery, capable of delivering 25 hours worth of mixed use from a full charge. Other multitasking features include BlackBerry Hub and instant action, two elements that proved quite useful when we first encountered them on the Passport (Review). As such, BlackBerry is hoping that the Leap proves equally adept at helping users work more productively.

As far as the Leap's other aspects go, up front is a 5" (1280x720) full touch display that registers a 294 ppi pixel density. Added to that, is a typing experience that BlackBerry claims to be the best in-class. Furthermore, the sports a quad-core 1.5 GHz Qualcomm MSM 8960 chipset, with 2 GB of RAM and 16 GB of onboard storage. Should that prove insufficient, there's a microSD slot for up to 128 GB of memory. The final elements worth mentioning is the 8 MP camera on the rear and 2 MP front facing one, both of which are pretty standard for mid-range devices. 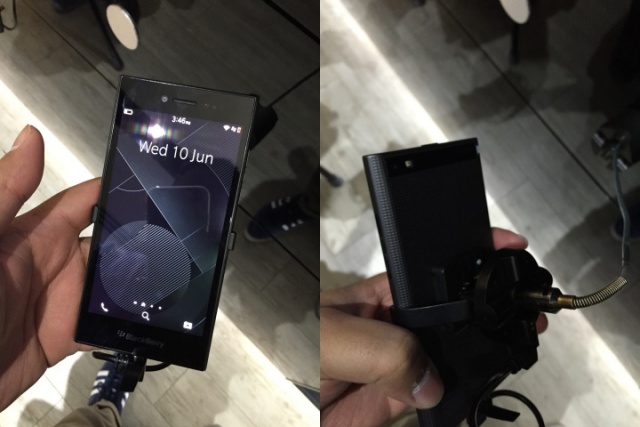 Vodacom is the first local carrier to sell the Leap, starting this week, with the prepaid price listed around the R4 000 mark. BlackBerry expects other carriers to begin selling the Leap in coming weeks, with the asking price not deviating too far from the R4 000 price range.