Once a commodity, but now a necessity in every modern day vehicle, navigation devices have become part and parcel of a driver's life. Very much in the same vein is dash cams, with their popularity growing by the week. To that end, it should surprise no one Garmin has merged the two devices into one product - the nüvicam LMT.

The nüvicam carries the unique distinction of being Garmin's first portable navigation device (PND) to feature a built-in dash cam. As such, it will free up some vital real estate on drivers' windscreens and dashboards, with Garmin also hoping that it's a more efficient driving aid.

Along with the ability to navigate to specific destinations and record footage that the driver might require, Garmin has also integrated a host of features to further entice would-be users. For example, Forward Collision Warning notifies drivers if they’re driving too close to the car ahead. Added to this, other key features include Lane Departure Warning alerts that will appear and sound if the driver drifts off the road or into oncoming traffic, as well as Garmin Real Vision, which displays house numbers within the nüvicam's camera view, with a bright arrow to direct drivers when approaching the selected destination. 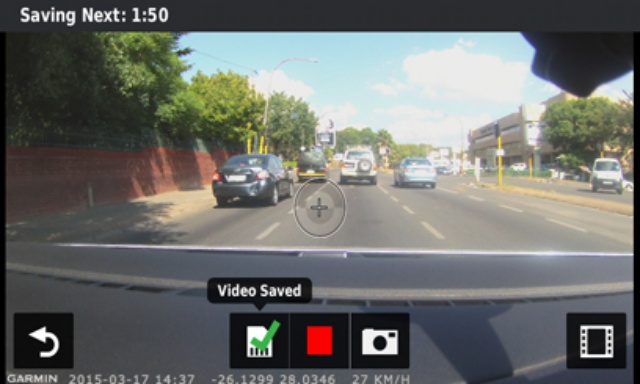 As far as specs go, the nüvicam features a 6" pinch-to-zoom glass display with a HD dash cam built into the back of the device. Once powered on, the dash cam continuously records (800x480) on 4 GB microSD card (included with purchase), and if an incident occurs, the nüvicam’s Incident Detection function will automatically save files on impact. Should the 4GB not cut it, the nüvicam can handle a 64 GB microSD card.

Furthermore, the GPS records exactly where and when events occur, and drivers can play back the video on the device itself or from a computer using garmin.com/dashcamplayer. There’s also a Snapshot feature on the nüvicam that allows drivers to capture still images in or outside of the vehicle if desired.

Expected to officially land in SA in coming weeks, the new nüvicam LMT will retail for an estimated R5 000.