Ahead of the opening of Computex tomorrow, the media were given a small but very delectable taste of some of the products that tech geeks can look forward to seeing and hearing more about in the days ahead.

In a promising glimpse of what is to come in the days ahead, we saw a few products each from Gigabyte (its new Aorus notebooks), Delta (the d755WTR ultra short throw interactive projector and LifeHub, which enables users to charge three mobile devices simultaneously) and Thermaltake, which showed off its Verto gaming headset and portable P-mega 41600 mAh power station.

The products that really caused our jaws to find a temporary but new home on the floor though were the Aorus gaming notebooks from Gigabyte, the 17.3" X7 gaming notebook, which is being billed as the thinnest (22 mm) and lightest (3 kg) SLI gaming notebook. It boasts GeForce GTX 860M dual graphics, with 8 GB GDDR5 graphics memory. It also supports RAID Xpress -3 mSATA SSD Raid 0, along with connecting to three displays. 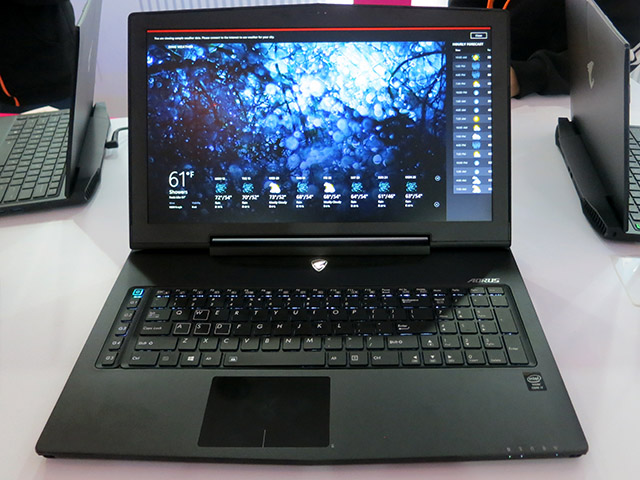 Crazy beautiful - the Aorus X7 is a sublimely attractive gaming machine, with a screen that has to be seen to be believed.

On the other end of the size spectrum was the 13.9" X3 Plus, also a gaming notebook but aimed at those for whom portability is a prerogative. The notebook appears to be living to the maxim of dynamite coming in small packages.

This boasts a GTX 870M 6GB graphics card, somehow crammed into a terrifically thin (22.9 mm) chassis and accompanied by an IGZO QHD+panel with a 3200x1800 resolution. The company explained that the X3 has two display options: the X3 with a 13.3" display and the X3 Plus that has a 13.9" display.bAlso taking sharp aim at the tradition of gaming notebooks requiring strong backs and shoulders, the X3 instead weighs in at 1.87 kg, while being less than an inch in height.

It further boasts a pair of 512 GB Next Generation Form Factor (NGFF) M.2 solid state drives in lightning RAID 0, two memory slots that allow maximum capacity of 16 GB and a Core i7 processor. Apparently, pricing for the two notebooks isn't totally outrageous either. The X7 will apparently cost in the region of between $2 300 and $2 800 (R23 000 and R28 000) while the X3 will cost between $2 100 and $2 600 (R21 000 and R26 000) Stateside. While the notebooks are destined to arrive in the States, UK, China, Germany and France as well as Korea and Singapore later this year, we were told there is a distinct possibility the brand could make its way to South Africa as well depending on the demand.

We expect we will see much more of the X3, and its bigger brother – which really wowed us in our brief time that we had with it today - later this week.