Grand Theft Auto V (GTA V) only launches on the PlayStation 3 and Xbox 360 during September, but Rockstar Games has already made moves to hijack gamers' attention by releasing the first gameplay footage from the PS3 version. Within this open-world adventure game, players will get to fill the boots of not one but three playable protagonists by the names of Michael, Trevor, and Franklin.

Amongst others, the almost five minute long GTA V gameplay trailer (posted below) reveals how players will be able to switch from one main character to the other, as well as some of the locations of this vast open-world title. Within these locations gamers will be able to harass and kidnap citizens, beat up cops, hijack cars, rob banks and of course hit the front nine of the nearest golf course for a bit of R and R after a tough day at the office.

Is GTA V a contender for game of the year? Well from the footage it certainly looks that way. Plus, Rockstar notes that the footage comes from a current PS3 and not from one of the new consoles, making the video even more impressive.

Well we’ve survived previous sales, and shall this one too, plus it’s always good to have another bunch of games that we will only progress 12% into. At least we own them now, and that’s all that matters.

If you are new to this sale, Lifehacker gives a number of tips to make the most of this redistribution of wealth into Gabe’s pockets. We wish you and your credit card good luck.

Grand Theft Auto might have stolen the limelight, but it was not the only major title receiving some gameplay treatment this week. With Assassin's Creed IV Black Flag, Ubisoft believes it can offer “an open-world unlike anything you’ve experienced before” with 50 unique locations spread out across the Caribbean.

In the video, game director Ashraf Ismail takes you to sea to show you Edward and his new missus, The Jackdaw. A lot of emphasis is placed on this ship and the importance of upgrades in order to progress further. Of particular interest was the way you are able to attack other ships in order to board it to gain cargo and plunder it, with no Captain Jack Sparrow silliness about it.

New Ratchet and Clank: Into the Nexus announced

The title, which is apparently intended as an epilogue to the Future saga (Tools of Destruction, Quest for Booty and A Crack in Time), happily marks a returns to the series’ roots. This comes after Insomniac’s period of experimentation with the franchise, first with the co-op All 4 One and then with the bite-sized tower defence themed Full Frontal Assault/Q-Force.

Thus, Ratchet and Clank: Into the Nexus will sport the familiar over the shoulder camera, single player campaign and a variety of old favourite and several new, outlandish weapons. One difference though, is that game will apparently have a spookier vibe than previous entries, although, judging by the trailer below, the offbeat sense of humour hasn’t been lost in space.

Take a look at the trailer for yourself and see if you too are excited as we are for this PS3 exclusive, for when it launches later this year.

The latest title in the Tom Clancy franchise - Splinter Cell: Blacklist - sneaks out of the development shadows during August onto the PS3, Xbox 360, Windows PC, and Nintendo Wii U. Within the upcoming title, a group of terrorists calling themselves The Engineers have initiated a terror ultimatum dubbed the Blacklist. This list is a deadly countdown of escalating attacks on US interests on home soil as well as abroad, with series protagonist Sam Fisher once again called upon to strap on his night vision goggles and suit up, to introduce some terror to these terrorists.

This week, Ubisoft released the latest gameplay trailer for the game called Liquid Natural Gas Plant gameplay demo. The trailer (posted below) showcases some of the action players can expect from this title, as Sam infiltrates a natural gas plant in Louisiana and employs his vast arsenal of weapons and skills to silently take down enemies.

No, that light you see at the end of this tunnel is not an oncoming train, but rather the herald of the first piece of downloadable content for Metro: Last Light.

The Faction Pack DLC, which is slated to disembark this Wednesday, includes three single player missions. These will give players the opportunity to step into the shoes of three different characters – a Polis ranger, a Reich heavy unit and a special detachment sniper from the Red Line. Considering that the characters are from the various warring factions in the game, it should make for an interesting ride. The DLC will be available for both Xbox 360, PS3 and PC via Steam, for $5 (R50) or 400 Microsoft points.

What do you give the Metal Gear fan that has everything? The new Metal Gear Solid Legacy Collection is not a bad idea. He/she would already own the eight major titles released between 1987 – 2012, but there are a few extras that should be appealing.

Included are two Ashley Wood Bande Desinee graphic novels released for the first time in the US, while the Legacy Book features 100 pages containing promotional posters and other art from the MG franchise. It’s currently retailing for a R1012 on Wantitall as an import, and if all goes well SA should see it in September. 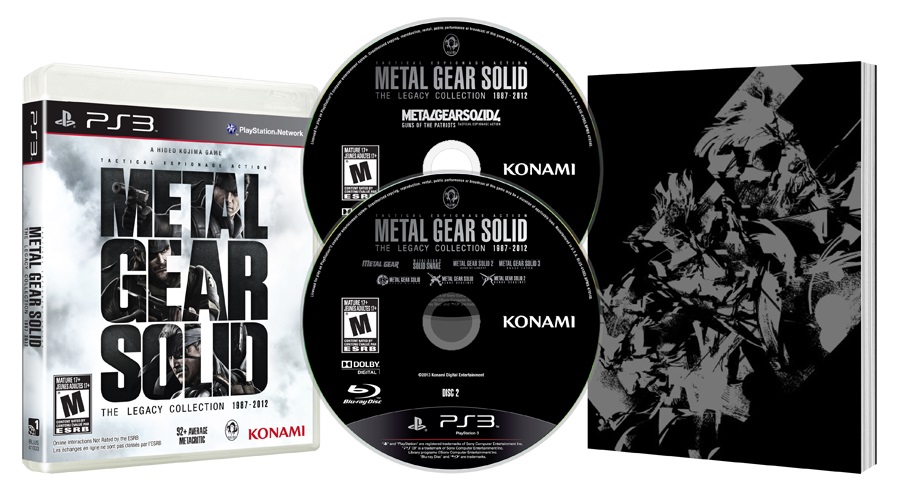