This week, a whole host of details about Middle-earth: Shadow of Mordor descended on Modern Earth, including the game’s release date (7 October), newly revealed box art, pre-order bonuses and, the one sure to draw an orc into the open, a new trailer.

Firstly, for those already certain they will be adding this entry in the Lord of the Rings world to their library, the pre-order incentives look decent. They include a Dark Ranger character skin; a "Test of Power" challenge mode in which players will be able to go try their sword hand at defeating  Sauron's captains, in order to gain a head start in the game and finally access to the leaderboards.

However, what really makes a strong case for keeping an eye out for the game is the new Banished from Death trailer, which hints that the gravitas of drama and strong acting will play a major role in the game. More intriguingly, it explores how one of the Rangers of the Black Gate, Talion, becomes allied with a spirit of vengeance after being returned from death (reincarnation, Middle Earth style), to avenge the brutal murder of his family. The game will release on PS4, Xbox One, PS3, Xbox 360 and PC.

In an eerie synchronicity, Alien: Isolation has also been dated, and apparently, players will face the horrific choice between spending the first couple of weeks of October clashing swords in Mordor or fleeing the menace of a Xenomorph. That’s right, its developer, Creative Assembly has confirmed that Alien: Isolation is similarly coming on the 7th of October.

While the game will certainly stand on its own, it has also been charged with the same question that haunted Colonial Marines before it launched – is this finally the Aliens game we have been waiting for? So far, all indications are very positive, with reports that the gameplay demo is deliciously scary, chock full of suspense and honours the original film both in tone and cannon.

In case, you, like we have been wondering what happened to Amy Hennig since the creative force behind the Uncharted franchise left Naughty Dog last month, it looks like the next Star Wars games will be benefitting from Hennig’s storytelling mastery.

Apparently Hennig has joined EA and will be working on the popular IP as creative director for Visceral Games. Granted, we didn’t think a talent like Hennig would be out in the cold long, so it’s certainly good news for her; but it is also good news for gamers who have been yearning for a terrific Star Wars game with a compelling story since, well, since Star Wars: Knights of the Old Republic.

In a blog post, Visceral Games general manager Steve Papoutsis pretty much nailed down why gamers with a love for the Star Wars universe have reason to be excited. “I’ve always admired her approach to creative development – focusing on nailing down the soul of a game first, and then making sure the writing, the gameplay, the design and the art comes together to form a unified, interactive experience for the player,” he explained. Sounds like exciting news for the next Star Wars games.

Activision has included a tasty treat for all Xbox Live users as its recently released 'Devastation' DLC pack will enable players to take on the Predator. The intergalactic alien hunter is joined by a range of new maps, Ruins, Collision, Behemoth and Unearthed which all boast environments catered to specific weapons and gameplay tactics. Other notable additions brings "Episode II: Mayday", the next installment in the gaming franchise's Extinction story, as well as a weapon, the "Ripper", which is a two-in-one hybrid SMG/Assault Rifle.

The aspect that most interests us, is being able to go head-to-head with the Predator, and assume the role of one of the most iconic alien characters in movie history. Players will able to do so, upon completion of the Ruins map and all its Field Orders. As the Predator, players can make use of its dual blades and shoulder mounted plasma cannon. There is however no confirmation on whether or not cloaking abilities will also be included (which would be fantastic, if available). The 'Devastation' DLC pack is currently listed at $15 (R160) for all registered Xbox Live users. Remember "If it bleeds, we can kill it".

Tropico 5 developers Kalypso has confirmed the release date of the PC version of its famous RTS title for 23 May 2014. Players will once again be able to assume the role of 'El Presidente' as the dictator sim series expand players’ tyrannical in-game reign. This latest installment in the franchise will allow users to develop a dynasty stretching from the early colonial periods to beyond the 21st century. Other features will include advanced trading mechanics, technological and scientific research, exploration and new multiplayer gameplay, allowing for a maximum of four cooperative or competitive players at one time.

Kalypso has also been hard at work designing all new artwork, as the title aims to look as polished and perform as seamlessly as possible for its console iterations. To date there is no confirmed release dates for the PS4 and Xbox One versions of Tropico 5, nor pricing for the game on any platform. But we expect more details to follow this latest announcement.

Having officially gone on sale on March 25 2014, developer Blizzard's new expansion for Diablo III, Reaper of Souls had a solid showing during its first week of sale, posting 2.7 million total sales after its first week. The estimated number comprises of both physical sales and digital downloads of the expansion and offers players the chance to finally bring an end to the Angel of Death, Malthael (main antagonist), or at least until Diablo IV comes out.

Along with a continuation on the Diablo universe's storyline, players will also have access to new spells, weapons and upgrades across all in-game classes, as well as the introduction of a new Crusader class, dungeons, objectives and Adventure mode.

The expansion is currently available for download in two variants, $40 (R425) for the standard version and $60 (R640) for the Digital Deluxe Edition. The difference between the two, has the Deluxe Edition boasting five additional character slots, as well as content for World of Warcraft and Starcraft II. This expansion will be part of the Diablo III: Ultimate Evil Edition scheduled for release on PS4 and Xbox One later in the year. 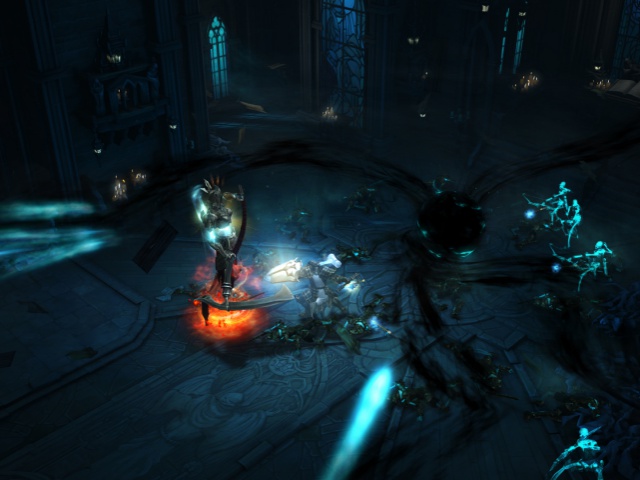