The more we are seeing of the PS4 exclusive Knack, the more appealing the game is steadily becoming. The latest glimpse of the game comes in the form of a new trailer reveal (below) of the two player co-op mode. Players will be apparently able to journey through Knack’s world together, one playing as Knack and the other as Robo Knack (alas, not called Nick), using either a PS Vita or a second DualShock 4 controller.

Additionally, the co-op mode will add its uniqueness – Robo Knack will, for example, be able to heal Knack and donate parts to him. Regardless of whether or not you are interested in co-op in the game, the trailer is still well worth a view, as it shows an array of terrains through which Knack will traverse, including cities, ice caverns, mountain passes and mines.

In somewhat related news a free Knack app called Knack’s Quest has also been released on iOS, which offers some familiar Beweled-like gameplay. The lure here is that players will be able to send items they collect within the app to the PS4 version when it arrives.

Doing the local gaming industry proud is an announcement very close to home, as Might, a fantasy role playing system, is launching tomorrow at the Outer Limits in Melville.

The role playing system, created by Basil Koufos, will be showcased during four one-hour sessions starting at 10am and running till 2pm. 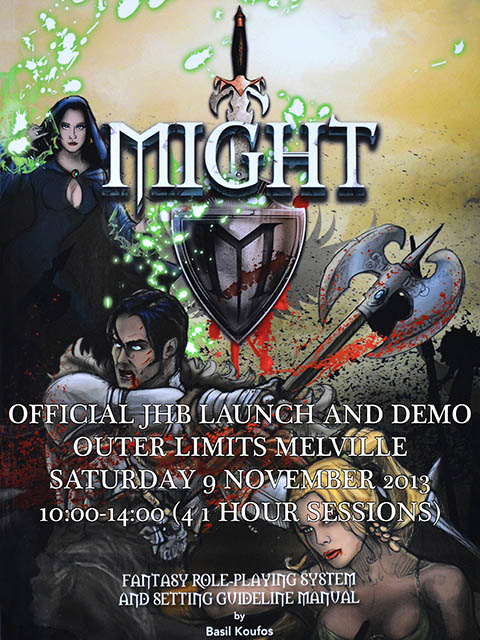 Yet more media emerging from the wild for an upcoming title comes from Konami, which has released its first five minute developer video for Castlevania: Lords of Shadow 2, outlining the role of Dracula in the forthcoming game.

According to the video below, this is not your typical Dracula as portrayed by most movies and literature to date. The development team explained that while their Dracula is still evil, they have made efforts to portray him with shades of moral grey and make him both more relatable and human in a way.

That being said, as the video shows, Konami have not ‘Edward Cullened’ this Dracula, with their rendition still radiating a formidable, dangerous and predatory presence. It’s also a relief to see that quite clearly, the game’s vampires do not ‘sparkle’ require oodles of makeup, or obsess about remaining immaculately coiffed in the midst of battle.

Given that Robert Carlyle (28 Weeks Later, Once upon a Time), is returning to the sequel to do the voiceover honours, we fully expect that this Dracula will effectively convey a measure of anguish and emotional depth. Take a look at the trailer below, particularly if you needed yet another reason to consider sinking your teeth into the title when it arrives at the end of February.

As promised a while ago, the follow-up to Rayman: Jungle Run has indeed arrived, and is now available on iOS and Android platforms for R25. The game, which has received a launch trailer (below) sees the titular hero abandon the greenery of the jungle for far hotter climates.

Along with a beefy 75 levels, Rayman: Fiesta Run also sees a few refinements to the gameplay, such as a world map of sorts, in which you have to unlock levels by collecting enough Lums; along with the ability to shrink and swim this time around. Additionally, foreground and background levels now make an appearance on the side-scrolling game as well.

Incidentally, if you already own and have played Rayman: Jungle Run on your device, installing Fiesta Run detects this and awards you bonus Lums from the outset.

Gran Turismo 6 squares off against Forza 5

Petrolheads can look forward to a virtual racing filled festive season courtesy of Gran Turismo 6 powersliding its way onto the PlayStation 3 and Forza 5 drifting onto the Xbox One. First out of the PR pitlane was Sony which declassified some of its raceplan for Gran Turismo 6. The game’s virtual garage will play host to more than 1200 cars, with the car page having been revamped to introduce new models in each of the 7 leading genres that includes historic cars, supercars, and sportscars.

There will also be some new tracks such as the Ascari racing circuit in Spain as well as an original Gran Turismo Arena. A new trailer has also been released (posted below) showcasing some of the game’s new features that includes dynamic weather changes, time transitions and the night sky astronomical system.

Not to be outdone, Microsoft released a new launch trailer for Forza Motorsport 5. This trailer showcases some of the vehicles that players will get to drive in the game including the dream ride that is the McLaren P1 hypercar. Feast your eyes on the automotive eyecandy in 1080p by hitting the button below.

The Fall series kicks off

Another Xbox exclusive looking to slash a great many hours off of our budgeted gaming time is the action-adventure title Ryse: Son of Rome. Last week, Crytek and Microsoft Studios revealed a four-part, live-action digital series based upon the game, dubbed The Fall, which will be released exclusively via Machinima.com from 5 November to set the stage for the release of Ryse: Son of Rome on 22 November.

The first two of these Spartacus and Gladiator-inspired episodes, entitled Funeral and Spirit of Vengeance respectively, have become available and are posted below for your enjoyment.

Our current favourite fighting game in the office is Injustice: Gods Among Us (quick review) and up until now there have not been any contenders to uppercut it off the top spot. One possible title who looks toned and up to that challenge is Killer Instinct, an Xbox One exclusive that sports a knockout graphical punch and an insane combo system. In the latest trailer for the game, players can see two full uncut matches wherein one of the newly revealed characters - Orchid -  is in action.

New video explores rational and thinking behind the PS4

While many fuss about the specifications of the next gen consoles, and which ones will boast higher resolutions and better graphics, Sony appears to be taking a different tack – focusing more intently on games.

A newly released video takes a rather fascinating, and not-what-you-would-expect look behind the scenes at the PS4’s design and the thinking and strategy behind it.

In it, the lead system architect for the PS4, Mark Cerny, points out that with games now being able to be played on a myriad of devices, getting the attention of developers had become much more difficult.

It is this concern apparently, that has dictated the PS4’s design and architecture, which came out of a brutal post mortem done on the PS3 following its launch, with the eye on making the console considerably easier to develop games for. Hit the video below for a rather fascinating and exciting insight into the PS4 and its longterm future.