HTC has entered the high-end smartphone fray once again with its latest flagship device for 2014, the One (M8). The Taiwanese manufacturer has seen financial losses over the past two years, despite their concerted efforts to re-energise the brand with highly specced smartphones and even tapping Robert Downey Jr. in a host of ads. The One (M8) is now the newest flagship, hoping to buck the recent negative sales trends.

As expected HTC has made design changes and enhancements for the M8 version of the HTC One, most notably being size. The new HTC One is now fitted with a 5” 1080p HD display, which is a step up, dimensions wise, on the 4.7” screen of the previous model (HTC One M7 review). Along with the larger proportions, HTC has also rounded the edges of the M8, in order to provide an ergonomic grip and more tactile feel for users, according to the manufacturer. The HTC One (M8) will be available in three different colour variants, Gunmetal Grey, Glacial Silver and Amber Gold, which appears to bear a striking resemblance to the colour schemes for the iPhone 5S. 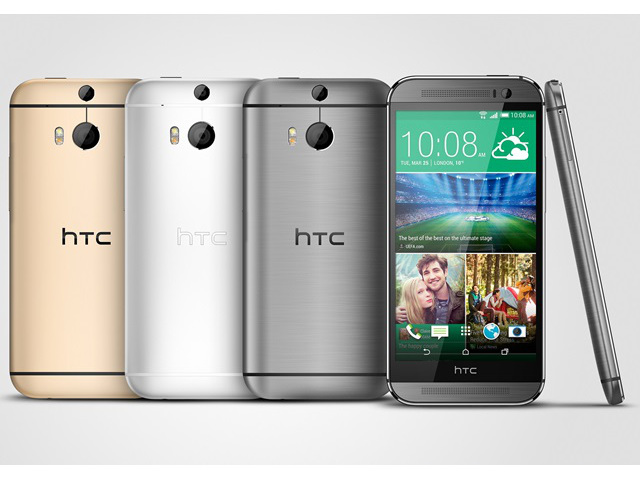 The refinements are not only at face value, HTC has made significant changes to the internal components of this flagship as well, with the One (M8) by a Qualcomm Snapdragon 801 Quad-core processor clocking at 2.3 GHz. This is a massive improvement compared to the M7 unit which clocked at 1.7 GHz, although we will have to wait and see whether or not HTC take full advantage of this powerful new processor.

Other notable features see the One (M8) boasting full integration with 4G/LTE and running the latest Android OS, 4.4 Kitkat. The user interface has too, seen an overhaul, with HTC incorporating the all new Sense 6. This new UI will include an evolution of the Zoe Video application into a cloud based service, with the new app available on the Google Play store later this year. Motion Launch is a gesture controlled shortcut application that will allow users to unlock their One (M8) with one simple swipe as well as answer calls without opening the device.

It appears that HTC has gone all out for this new iteration, packing it full of powerful processing units and intuitive designs. We will however have to wait and see how HTC can market it effectively to go up against the reigning flagships kings.

HTC has confirmed that global availability for the One (M8) by the second week of April 2014, although pricing for African markets is yet to be disclosed.