We love it when a good gadget receives an update, such is the case with the Livescribe Pen (review). The newly announced Livescribe 3’s timing is impeccable, coming hot on the heels of another new update announcement, that of the iPad Air. Why is this relevant, you ask? Simply because the latest digitising pen is designed particularly to work in conjunction with iOS devices.

The pen is a bit of an advancement over the model we saw last year, enabling users to write notes in special dot paper journals, then translating handwritten text directly and instantly to their iOS device via Bluetooth. The handwritten text can then be converted into editable text using the Livescribe app. This we suspect, could a boon for those of us who tend to quickly write copious notes in journals and then return to them, only to find what looks like the attempts of a drunken spider at attaining literacy. 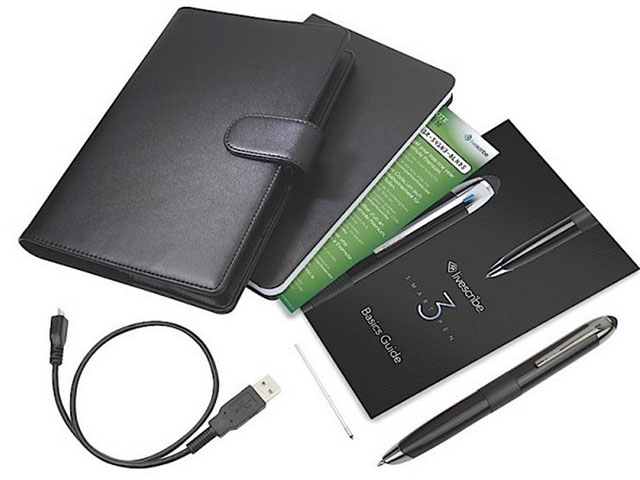 The Livescribe 3 smartpen Pro Edition includes a couple of extra goodies, including a smart-looking smartpen portfolio.

Users can still combine recordings and written text, although the recording duty relies on the microphone in one’s tablet, rather than an integrated mic in the pen this time around. Furthermore, the pen also now boasts both a stylus tip and a ballpoint nib, accessed by twisting a ring on the smartpen.

Additionally, those who were turned off by the previous generation’s thickness, may be interested to hear that the pen seems to have been placed on a diet, eschewing the onboard screen for a slimmer profile. Users can also share written notes, photographs and diagrams as PDF files over Mail, Messages, Evernote, Dropbox and other apps.

Worth noting is that the device, if it seems like the ‘write’ option for you, is only compatible with iOS devices that are Bluetooth Smart Ready, including the iPhone 4S or later, third-generation or later iPad, iPad Mini, and the fifth-generation iPod touch or newer. The free Livescribe+ mobile app is available from the App Store for devices with iOS 7.

While local release dates and pricing has not yet been confirmed, apparently it will be making its way to our shores and into local writers’ hands in due course. In the meantime, take a look at the video below to see the pen in action.