The company began by noting that the desire for video conferencing is growing in leaps and bounds, with video calls far outstripping their audio counterparts. But for many, having a video conference is not an intuitive experience.

Indeed, in a traditional setup, participants have to hunch towards a central speaker in the  middle of the table while contorting themselves to look at the screen ahead of them.

Logitech’s Rally system though mitigates against this scenario by instead supporting up to seven ‘mic pods’, which the company enthused can cater to up to 46 people.

Unlike traditional video conferencing systems, the solution separates the speakers from the microphones. Speakers are positioned near the display, so that the audio is better aligned with video, and voices of participants further back come from the front of the room, which is what people intuitively expect.

As well, the microphones are able to suppress noise and interference while the camera sports 4k optics. As would be expected, the speakers, which are part of the system, outperform the single speaker that you see on most conferencing setups – and which we have found often are a bit of a strain to hear clearly. 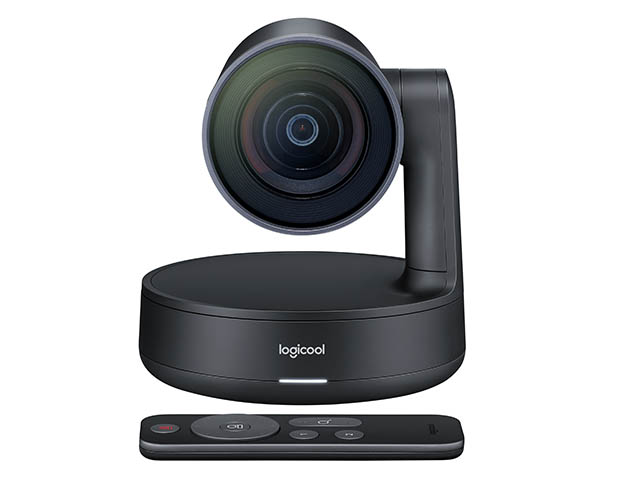 However, based on the demo, the most impressive part of Rally is what Logitech calls Right Sight, Right Light and Right Sound. Right Sight automatically auto adjusts for the size of the  room and the number of participants. If for example there are fewer people seated around the conference table, the Rally’s camera will automatically zoom in to fill the frame better. And likewise, when there are more people, the camera automatically zooms out so that everyone is in view.

Right Light is intended to expose the scene correctly, taking into account light that may be streaming in from the room’s windows, without underexposing the person speaking.

Craig Hill, the head of reseller channel and video collaboration at Logitech Europe, elaborated that video conferencing can be divided into two scenarios - old world and new world. In the old world approach, it is confined to one dedicated conference room and the solution is difficult to deploy, which means that only a few individuals are able to take advantage of video collaboration.

In the new world scenario, it centres around cloud based software, whether that is Microsoft Teams, Skype for Business, or Slack, to name a few. As well, video conferencing solutions are plug and play, and don’t need extensive setup or maintenance by the IT department. Rather, solutions under this scenario are designed so that anyone can start a meeting with them and be up and running in moments.

It is under the latter scenario that Logitech Rally is intended to offer. And it is with this in mind that the solution has designed to be modular, so that it can be equally applicable to small and medium businesses as to large organisations and enterprises.

“Just a few years ago, a high quality video and audio system like Logitech Rally would have easily been a five-figure investment,” said Scott Wharton, vice president and general manager of the Logitech Video Collaboration. “Now, with the Rally portfolio of products, customers get a premium, modular system that raises the bar for USB-connected AV solutions - all at a fraction of the price of other high-end systems,” he added.

One thing that wasn’t detailed was pricing, likely due to the fact that the solution is customised according to the client’s needs.