In the DC universe it will soon be not Batman v Superman, but rather Suicide Squad vs. Dawn of Justice. Which movie will win at the box office is not known yet, although when it comes to trailers we would put Suicide Squad firmly in the lead.

Clarke and Bruce are trying their utmost to capture the spotlight in the latest trailer for the Battle of the Egos. Unfortunately, there’s not much here that we haven't seen before, only a couple of shots of Wonder Woman (Gal Gadot, Fast Five).

In one of the previous trailers we caught a glimpse of Doomsday, but there was also a hint of another danger on the horizon. One of the clips showed insect like creatures, with speculation being that they might be Parademons, minions used by another one of Superman’s big enemies, Darkseid. Being able to move at great speed, he makes use of Omega Beams shot from his eyes, while sometimes appearing with Omega symbols on his costume . A new scan from the latest edition of Empire shows Batman staring at a massive Omega symbol, which we’re sure can point only in one direction. 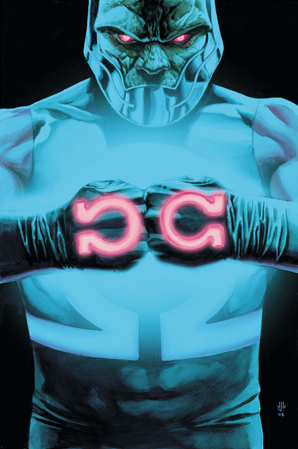 The baddie from Tron, we mean Darkseid.

So that means we’re still waiting for both Aquaman (Jason Momoa, Conan the Barbarian) and Darkseid to make their appearance in a trailer. Perhaps DC and Warner Bros. should focus on important events for upcoming trailers, instead of rehashing old ones and packaging them as new.