There’s about to be a new tablet in town vying for your affections, with Samsung officially announcing the incoming 10.5” Galaxy Tab S6.

Thanks to a leak last month, we were already given some insight into what Samsung’s answer to the latest iPad Pro would look like. Happily, many of those details have now been officially confirmed.The 5.7mm thick tablet does indeed sport an inscreen fingerprint reader, and its 10.5” display is Super AMOLED with a 2560 x 1600 resolution. Also onboard are quad speakers, with the sound provided by AKG and Dolby Atmos.

Where the tablet appears to be positioning itself, judging by its launch video below, is as an artist’s companion as well as a productivity tool. To this end, it sports a redesigned S Pen, with remote control functionality and wireless charging capabilities. This means that users will be able to control the multimedia content they create even when the tablet is not in hand. As with the iPad’s Pencil 2, the S Pen features wireless charging that, according to the company, will delivers up to 10 hours of battery life after just ten minutes’ charge time. 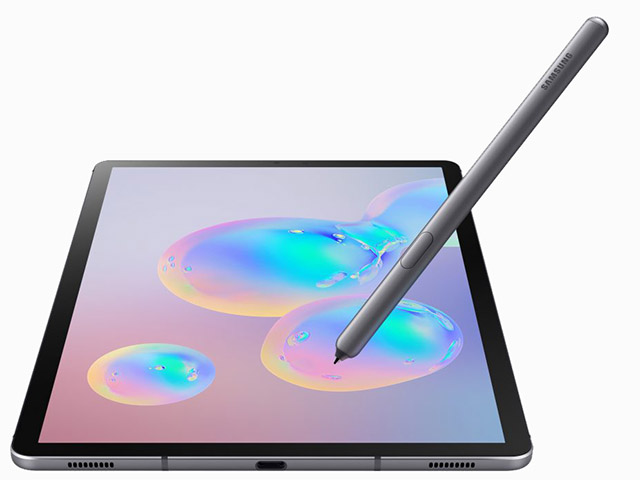 Admittedly, 10” tablets aren’t exactly the most obvious choice to snap photos with, but if you absolutely have to, then the tablet’s camera functionality will oblige. Onboard are a dual 13 MP and 5 MP camera setup, with the latter boasting ultra wide functionality, that offers a 123-degree field of view.

Where the Tab has the iPad beat is that its storage is expandable up to 1 TB via a microSD slot. Finally, it packs a 7 040 mAh battery, although whether this will offer the 14.5 hours worth of use asserted to by the earlier leak, remains to be seen.

According to the company, for those aiming to use their tablet as a productivity machine first and foremost, Samsung DeX is packed into the Galaxy Tab S6, enabling users to switch between using it as a consumption device to a more traditional PC-like experience. To that end, a DeX function key has been added to the Galaxy Tab S6’s new dedicated Book Cover Keyboard. It assured that the keyboard has been fine-tuned for better functionality, including an S Pen holder, free angle stand, touch pad and new function keys.

Colour wise, it is coming in Mountain Grey, Cloud Blue or Rose Blush ie pink. Expect to pay R16 500 for it when it becomes available later this month.