While conventional logic might dictate that by now, keyboards – both physical and touch based - should have completely eradicated developments of the humble pen, and its more reticent partner, paper this is not the case, as the likes of the Livescribe technology has clearly indicated. The latest geek gadget to take firm aim at drawing enthusiasts is the Scribble Pen.

The device though, is not your father’s kind of writing instrument, as its 16-bit RGB colour sensor can apparently capture any colour you point it at in the world (up to 16 million of them) and then render that either on paper if using the ink-based pen, or on a screen if using the stylus version. Essentially, the pen functions like a tangible version of Photoshop’s eyedropper tool, enabling you to capture distinctive hues of colour without having to resort to using your computer’s digital imaging program. 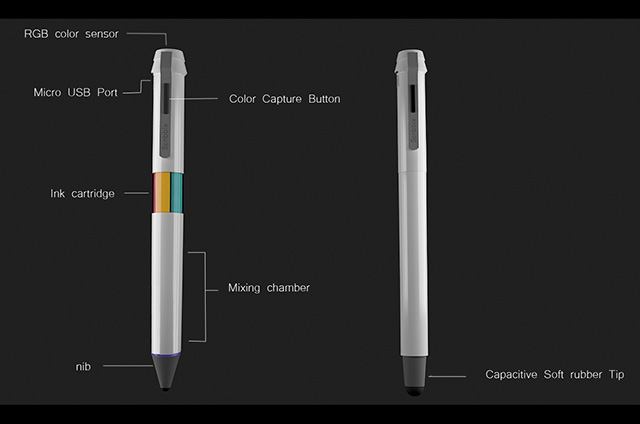 What’s more, up to 100 000 of these captured hues can then be saved into the pen’s 1 GB of onboard memory, giving users an enviable colour palette that would have make Leonardo da Vinci or Salvador Dali turn a very distinct and recognisable shade of green.

The Scribble sensor pen will be available in two distinct versions – Scribble Ink, which caters to drawing on conventional media, and then the Scribble Stylus, which aims to please the smartphone and tablet-toting artist, with compatibility for iOS, Android and Windows Phone devices. Additionally, whereas the Scribble Ink has an ink cartridge, mixing chamber and multiple interchangeable tips, the Scribble Stylus has a capacitive soft rubber tip.

“For the colour blind, kids, interior decorators, homeowners, teachers, artists, photographers, designers and students, the Scribble colour picker pen will make copying an exact colour, any colour from any object, an absolute breeze,”  commented a spokesperson from the company. The company added that with Scribble, users would also be able to scan, match or compare colours. Both versions support Bluetooth 4.0, and at 39 g, carrying 100 000 hues around with you shouldn’t be much of a burden.

The best news is that the device doesn’t appear to be horrendously priced either – with the former coming in at $150 (R1 500) and the latter, a little more than half that at $80 (R800). Alas, the device is not yet available commercially, and will apparently launch its Kickstarter campaign next month.

Nonetheless, it is one pen that may just prove the axiom – the pen is mightier than the sword – to be more than cliché, but actually true. After all, in the 21st century, how many people can you say still carrying around swords, as opposed to those still wielding a pen (sophisticated or otherwise) in their jacket pocket?