The Digital Paper is Sony’s innovative new 13” E Ink tablet, designed to streamline the way people work in office spaces often cluttered with papers, documents, files and folders that take up space. The Japanese manufacturer intends to market this tablet for application in the legal, tertiary education, medical and corporate industries.

Sony has fitted a 13.3” (diagonal) display which is the thinnest (7.14 mm) and lightest (357 g) in the world, for any device with similar dimensions, according to Sony. That essentially makes it thinner than one of our TechSmart magazines. The display itself incorporates E Ink Mobius technology and produces a high level contrast of 1200 x 1600 dots. This means content will retain solid levels of visibility, even in sunlight. The E Ink design will allow users to annotate documents with its specially designed stylus, so content that has been edited can be shared in a more efficient (paperless) manner. 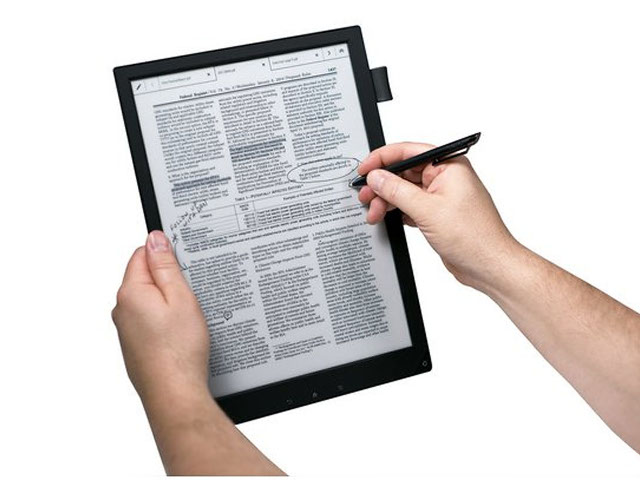 Apart from its unique display, the other notable feature of the Digital Paper is its rechargeable lithium-ion battery which is said to offer up to three weeks worth of power from a single charge. If this is true under normal everyday working usage, it may just be the Digital Paper’s biggest selling point.

As far as office functionality goes, it has built-in Wi-Fi capability, which will allow for sharing of PDF-based content between users. With 4 GB of internal storage capacity, which translates to roughly 2800 PDF files (at 1 MB each) being stored on the device. There is also a microSD slot to allow users to expand storage up to 64 GB.

Sony has scheduled the Digital Paper for initial release in the United States during May this year, with an estimated retail price of $1 100 (R11 650). To date there are no plans to export in further a field, but if it has a strong showing the US market, the Digital Paper could be making its way to South Africa.