The Lone Ranger hits the silver screen this Friday and thanks to Disney, TechSmart recently got the chance to catch an early screening of the movie at Cinema Nouveau in Rosebank Mall. Here are our top 5 bullets in The Lone Ranger’s reasons-to-watch chamber.

Anybody who grew up watching westerns as well as animated TV series such as Lucky Luke and Bravestarr, would more than likely have played cowboys and indians as kids. In that case, The Lone Ranger will definitely stir up more than a few nostalgic memories.

The film sees two unlikely heroes in the form of Native American warrior Tonto (portrayed by Johnny Depp) and man of the law John Reid (brought to life by Armie Hammer, The Social Network) joining forces. Tonto and The Lone Ranger are tasked with bringing notorious outlaw Butch Cavendish (played by William Fichtner, Prison Break) to justice. As a side note, the film also answers the question as to why The Lone Ranger’s faithful white steed is called Silver.

Depp up to his usual high standards

Johnny Depp is known for his offbeat portrayals and breathing life into colourful characters such as Captain Jack Sparrow. With The Lone Ranger he continues on this path, filling the boots of the legendary wanderer Camanche Tonto. Depp is responsible for many of the film’s more humorous moments, thanks to his seemingly loopy and outlandish behavior.

However, Tonto is not just there for amusement, being a complex character with dark events in his past. He has his own deeply personal reasons for wanting to stop the sinister Cavendish.

I thought I told you to tone down that excentric style, before I introduce you to the rest of the rangers.

The chemistry between the movie’s two lead actors - Depp and Hammer - is very good, as the two reluctantly set out to conquer greed and corruption as a team. Although the duo hogs most of the screen time, they are supported by a stellar supporting cast.

These include the main bad guy Cavendish, whose portrayal by Fichtner makes for a stark contrast to the light hearted pairing of Reid and Tonto. The scar-faced Cavendish looks every bit the villain, but his scary appearance is totally outmatched by his sinister behaviour and cannibalistic taste for uncooked human flesh (a strange quality within a Disney film with families in its marketing scope).

Tom Wilkinson (Batman Begins and Eternal Sunshine of the Spotless Mind) also shines as Latham Cole, a railroad man who wants to unify the US via railroad tracks at any cost.

A few actors land brief appearances within The Lone Ranger. These include Barry Pepper (Saving Private Ryan; The Green Mile) who plays the General Custer-esque Captain J. Fuller, a Cavalry officer trying to protect settlers from the perceived Indian threat. A character we would have like to see more of was Red Harrington (played by Helena Bonham Carter), the straight-talking, ivory-legged madame of a lavish ‘gentleman’s entertainment establishment’. 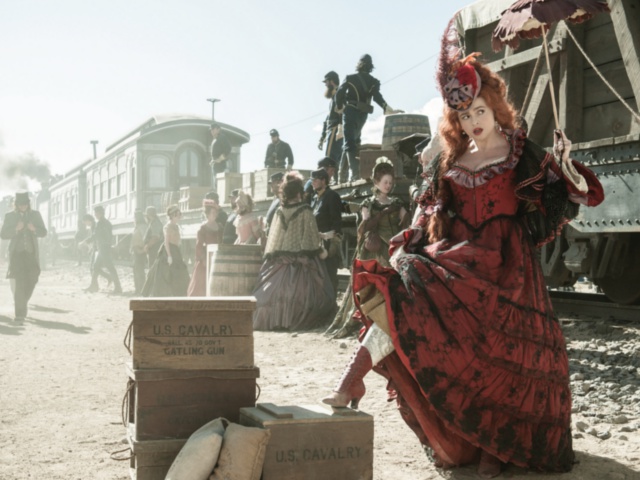 Oh boy, I need to hit the taning salon and get some colour on that leg.

Some people are of the opinion that less is more. This point of view is most definitely not shared by film producer Jerry Bruckheimer and director Gore Verbinski, who were also the same two amigos at the helm of the blockbuster Pirates of the Caribbean movie franchise.

We expected the film to be packed to the hilt with over the top action sequences and weren’t disappointed. Whether it is gun battles between Indians and cowboys, outlaws fighting lawmen, or extended chase sequences involving a runaway steam train, The Lone Ranger boasts plenty of action to keep viewers entertained. 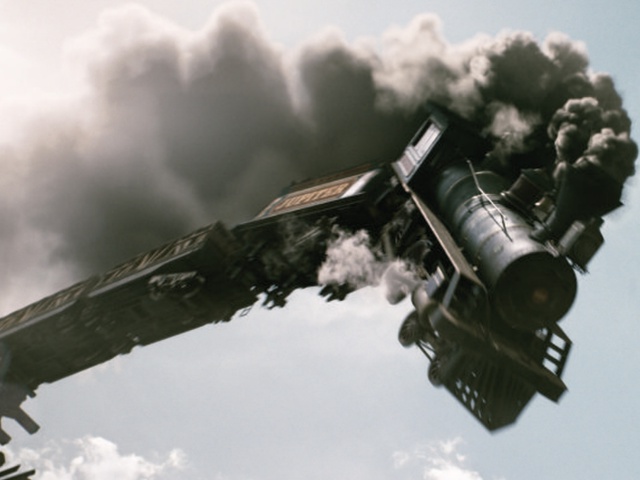 Taking that short cut turned out to be a terrible idea.

If there is one serious critique, it’s the fact that The Lone Ranger is nearly two and a half hours long (149 minutes). But if action is your game, or Johnny Depp your man, then the crazy antics of Tonto and numerous action sequences will make the lengthy cinematic journey a lot more manageable. Check out the trailer posted below.