Star Wars still remains one of the greatest franchises in movie history, a legacy stretching six films and over three decades is nothing to scoff at. Not to mention the JJ Abrams helmed seventh movie arriving soon in a galaxy not too far away (sorry, we had to). If there is one thing that Star Wars has been able to generate, it is merchandise; from Jedi themed clothing, Princess Leia costumes and countless animated series and console games. This is our collection of the strangest, most innovative Star Wars-themed merchandise.

One of the most iconic vehicles in the Star Wars universe and movie history, the Millennium Falcon was the dream ride of every wannabe Han Solo. To honour its legacy, Haynes has published this comprehensive owner’s manual to offer an in-depth look at legendary spacecraft.

We know a lot of skeptics will think Haynes thumb-sucked most of this book, but the publisher in fact tapped acknowledged Falcon experts Chris Reiff and Chris Trevas for the creation of this manual. It may not be the flashiest of all Star Wars merchandise, but should form part of any true die-hard’s collection. 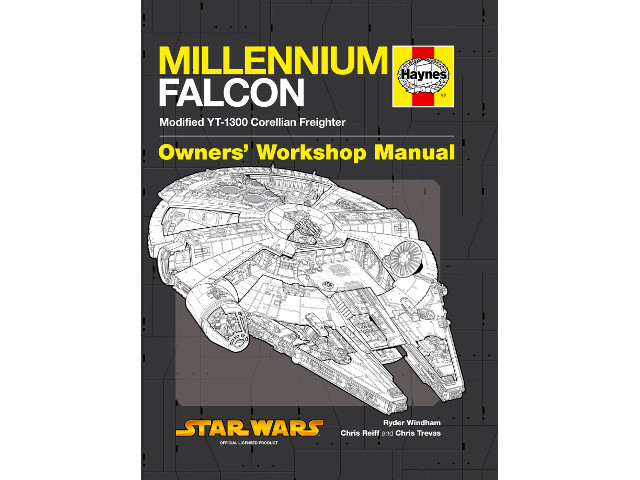 Being a father is pretty difficult, let alone when your estranged son joins the ranks of your sworn enemies. This is the premise behind Jeffrey Brown’s hilarious book, Darth Vader and Son, where readers can get a snippet of what it’s like for the Dark Lord to handle a young precocious Padawan.

Brown has been able to filter autobiographical anecdotes on fatherhood through the vast and sprawling universe that is Star Wars. The book is easily relatable for fathers who have experienced it all, with only possible exception being, ‘take your kid to work day’ involving the Death Star. No wonder Luke blew it up. 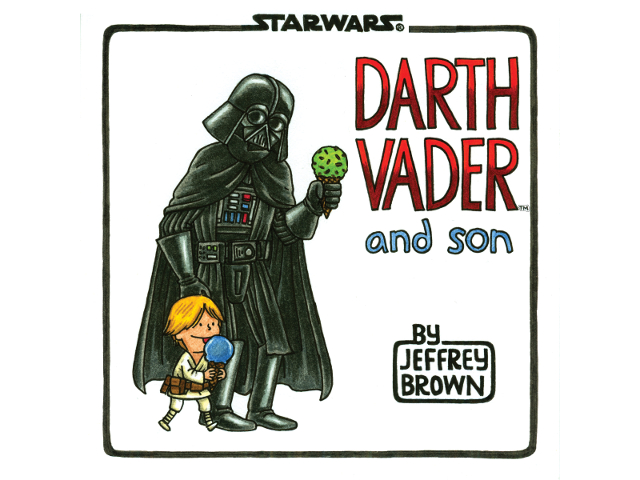 This is the bathrobe you’re looking for. Every Jedi enjoys their downtime after felling a dozen stormtroopers, why shouldn’t you? Made from 100 % cotton, these bathrobes will be the perfect accessory in your Jedi, Princess Leia cosplay escapades (if that’s what you’re into… no judgement).

Available in a one size fits all 50” waist, it should leave plenty of room for your carefully concealed lightsaber. If being a Jedi doesn’t do it for you, it is also available in a black Sith variant. Available from those Star Wars crazed nuts at ThinkGeek. 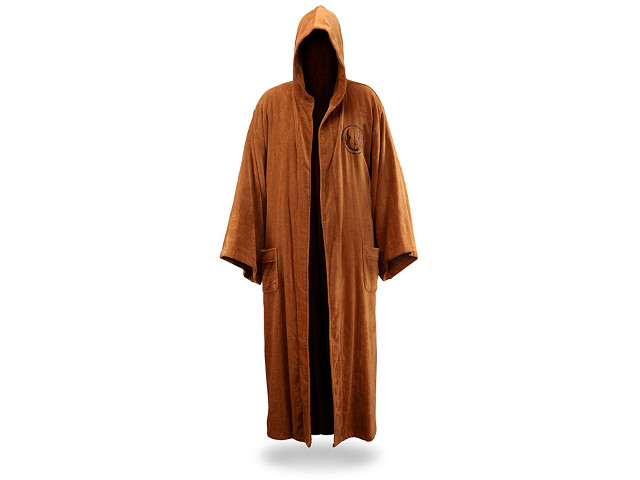 This book is for those drawn to the dark side of the force. If you thought Darth Maul was the coolest part of Phantom Menace, and teared up a little when he was cut in half by a young Obi-Wan, this book is perfect for you. The Book of Sith offers interested readers a great insight into the Sith origins, mythology and fighting abilities.

According to publishers, Chronicle Books, Book of the Sith consists of six essential Sith texts, five of which were compiled by Darth Sidious (the most powerful Sith Lord in known history and Darth Vader’s mentor), with the sixth written by himself. These chronicle the existence of Sith purebloods, the foundations of the Sith Order, the philosophy behind the ‘Rule of Two’ and Darth Sidious’ Sith manifesto. It also features the comments of some influential Jedi like Mace Windu, Luke Skywalker and Master Yoda.

An interesting work of fiction, the Book of Sith is great for those who love everything about Star Wars and the Dark Side. 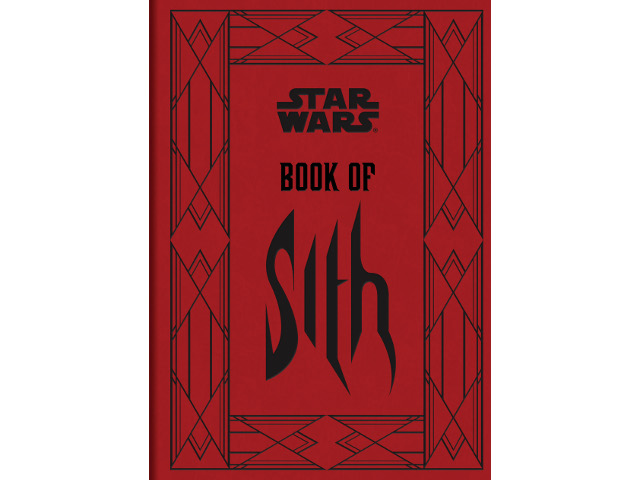 No list about Star Wars merchandise would be complete without some reference to lightsabers. Their look and sound in particular remain one of the most iconic and memorable aspects of the franchise.

The weapon of choice for Jedi and Sith alike, the lightsaber made its official debut in Obi-Wan’s bungalow in Episode 4, A New Hope, ever since then, you had to have one. ThinkGeek has now made those dreams a reality, with newly designed awesome lightsabers for characters such as Anakin Skywalker, Yoda, Darth Vader and even Darth Maul’s red double-bladed lightsaber.

Some of the features include power-up and down modes and motion sensor activated sound effects, with ThinkGeek claiming an estimated 1000 hours of use from the three AAA batteries (depending on lightsaber type). Let the excessive roleplaying begin. 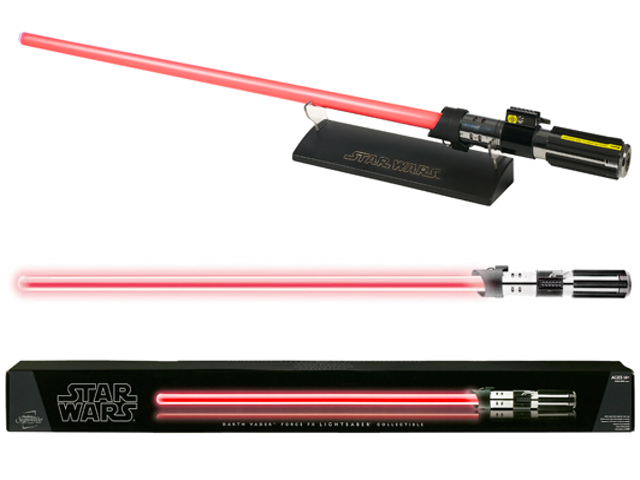 There are very few things a Jedi can’t control, the weather is one of them. Sometimes the Force just will not cut it, and a simple umbrella is the best route. That does not mean you have to forego your Star Wars swagger, since a Lightsaber Umbrella is still better than hiding in a tauntaun.

When closed they look pretty incognito for the most part, but once opened, they show exactly who your favourite Star Wars character is. These umbrellas are available in Yoda, Darth Vader and Obi-Wan Lightsaber hilts and colourful shaft resembling the original. They also feature Jedi or Imperial insignia based on your choice of umbrella. 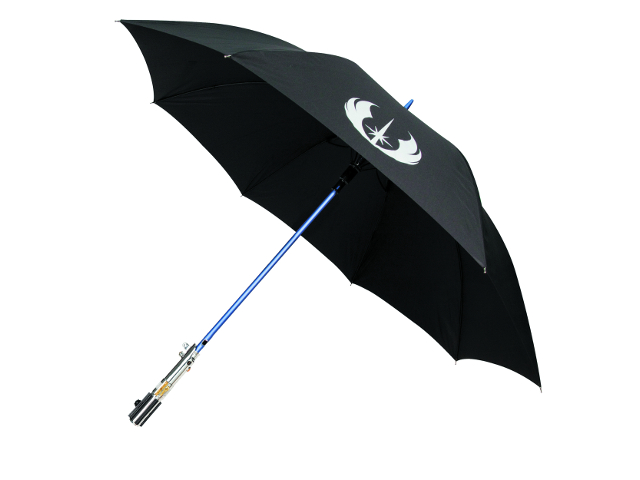 Custom made by Kayla Kromer

We all wanted a racing car bed when we were young, then we grew up and settled for a boring king or queen sized one. For those who have not grown up just yet, we’ve got the next best thing, the Millennium Falcon… bed, that’s right, bed. Designed by school teacher, Kayla Kromer, whose passion and love for Star Wars clearly stretches further than most.

Kromer said that she originally intended creating a Death Star styled bed, but opted to go for the Falcon due to lack of space in her bedroom. Born from a seventies era circle bed, it took a total of four months to create during Kayla’s downtime. The bed also features ‘smuggling’ areas to house a keyboard, mouse and other small objects, as well as fully functional LED lights in front and rear.

Unfortunately this bed is a one of a kind, but Kayla has put her talents to create a giant hamburger bed. We just hope a Death Star themed one is in the works. 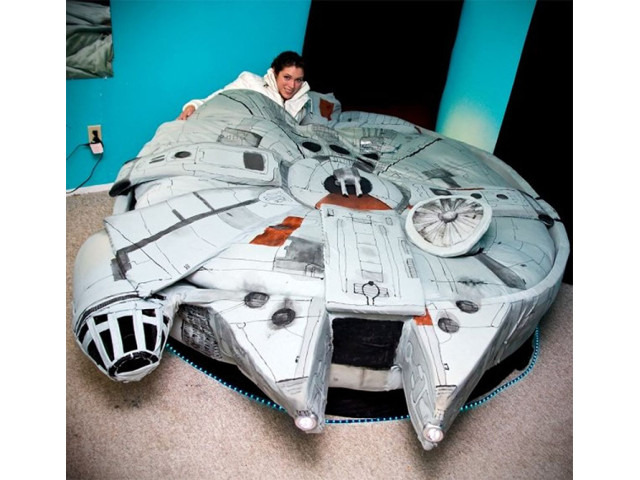