On the large format size, the mirrorless Fujifilm GFX50S II is the successor to 2017’s successful GFX 50S. The GFX50S II packs a 51.4MP large-format sensor, able to capture every detail in sharpness across the frame, all in a highly portable body alongside built-in image stabilisation. But perhaps most interesting is the Fujifilm GFX50S II price, set to retail in the region of only R83 000 when it arrives in South Africa in October 2021. This makes it the most affordable GFX camera in the Fujifilm line-up. 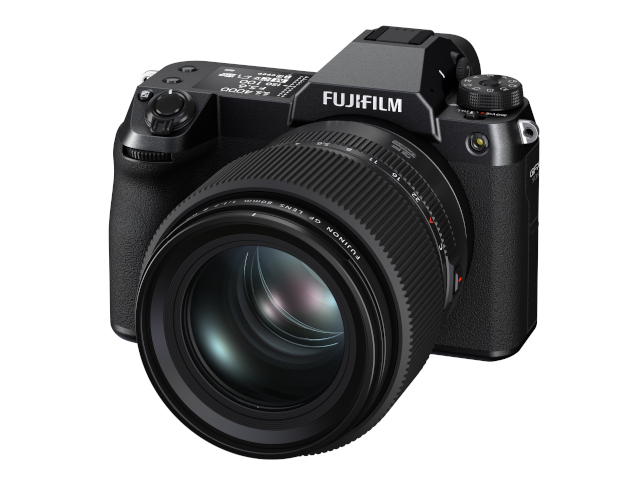 The GFX50S II’s image sensor measures 55mm diagonally (43.8 mm x 32.9 mm) and is approx. 1.7 times bigger than a 35 mm full-frame sensor. This large size allows for a wide dynamic range and a high signal-to-noise ratio. The resulting image reproduces deep tonality and texture from shadows to highlights, delivering image clarity with minimal noise even when taken in low light.

Importantly, Fujifilm managed to design the camera for added mobility so that users can explore its exceptional image quality in a broad range of shooting fields. Larger format cameras’ size usually condemns them to use in the studio only. However, weighing approximately 900g and measuring 104.2mm high and 87.2mm deep, the GFX50S II is as comfortable in the field as it is in the studio. The casing is made of highly rigid magnesium alloy, while the body is weather-sealed at 60 locations to offer dust- and moisture-resistance and ability to operate in temperatures as low as -10℃. 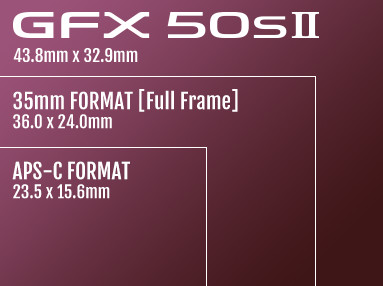 The GFX50S II’s five-axis image stabilisation mechanism allows photographers to use the camera in hand rather than cumbersomely mounted on a tripod. Thanks to a high-performance gyro sensor and accelerometer that can detect motions at high accuracy, the camera offers up to 6.5 stops of advantage, the highest in the history of the GFX Series.

Fujifilm also worked on the autofocus, with the GFX50S II now providing more accurate autofocus in Face / Eye Detection compared to the previous model, due in part to the excellent X-Processor 4 image processing engine. During the contrast detection process for AF, the built-in image stabilisation mechanism controls sensor motion blur to add speed and accuracy to the AF performance, ensuring to capture the decisive photo opportunity in any condition. One of the strengths of the large format sensor is its ability to produce a very shallow depth of field. This is complimented by GF lenses’ edge-to-edge sharpness to accentuate the main subject against a blurred background for added three-dimensional definition.

As with other Fujifilm cameras, users will also find Fujifilm’s Film Simulations onboard, which simulates the exact colours and tones of different types of film. The GFX50S II offers 19 Film Simulations, including “Nostalgic Neg,” developed for the launch of the GFX100S and characterised by high saturation and soft tonality.

For photographers on the lookout for a compact and lightweight camera, the Fujifilm X-T30 II mirrorless camera should be reserved for serious consideration. The follow-up to the popular X-T30 (released in 2019), the new model inherits the same compact body, but improves on high-speed AF performance and image quality equivalent to the flagship Fujifilm X-T4. 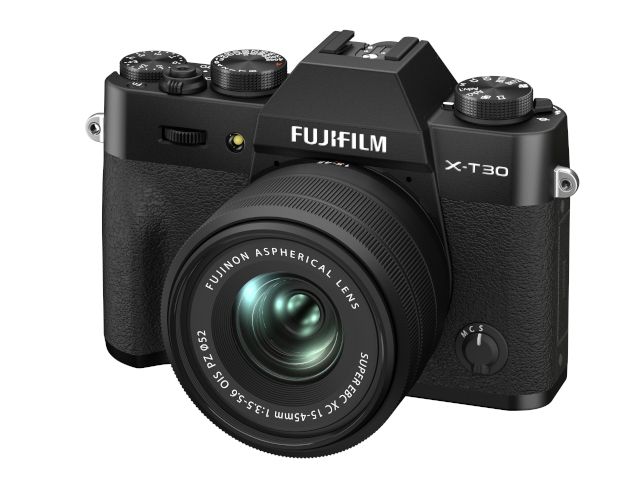 The X-T30 II is equipped with the 26.1MP X-Trans CMOS 4 sensor and the X-Processor 4 high-speed image processing engine to enable advanced phase-detection AF across the frame (approximately 100%). The X Series’ fastest AF speed of 0.02 seconds is coupled with an impressive AF tracking performance to capture decisive photo opportunities. This while it’s able to focus in near darkness at -7.0EV, achieved when the camera is mounted with the Fujinon XF50mmF1.0 R WR lens.

What’s more, the camera delivers blackout-free burst shooting at up to 8fps in the mechanical shutter mode and up to 30fps in the electronic shutter mode.

With new updates to the AUTO mode, no more fiddling is needed seeing that the camera automatically identifies the type of shooting scenes based on whether there are people in the frame and other data such as color information and light source distance. It applies the latest image processing technology to adjust settings to optimum options, making it easy to obtain beautiful pictures, with no more than a switch of the AUTO lever at the top of the camera needed.

It’s not just for stills that the X-T30 II is a top performer, since the camera uses the amount of data equivalent to 6K to generate 4K video to assure high resolution. The camera can output 4K/30P video at 8 bit 4:2:0 onto an SD card, and 4K/30P video at 10 bit 4:2:2 to HDMI. Furthermore, it now supports Full HD/240P high-speed video, capable of replaying a momentary action of a fast-moving subject in slow motion in up to 10x. All this can be viewed on the high-resolution 1.62-million-dot LCD monitor on the rear panel, an upgrade from the previous model’s 1.04 million.

And thanks to Fujifilm’s excellent colour reproduction ability, the X-T30 II comes with 18 Film Simulation modes, including “Classic Neg,” ideal for street photography, and “ETERNA Bleach Bypass,” which faithfully simulates the film processing technique of the same name.

Fujifilm X Series shooters will be pleased about the addition of two more lenses to the lineup of interchangeable XF lenses, known for their outstanding image quality.

The Fujinon XF33mmF1.4 R LM WR is a new-generation large-aperture prime lens that delivers exceptional image sharpness even when wide open at F1.4. With a focal length equivalent to 50mm in the 35mm film format, it is an essential new-generation lens for all X Mount users. Expected in November, the XF33mmF1.4 will cost in the region of R13 000.

Fujifilm users looking for a bit of a wider angle will find the Fujinon XF23mmF1.4 R LM WR lens appealing. This prime lens is a full update to the popular previous model, now with a complete overhaul of optical performance. The lens delivers fast and highly accurate autofocus in both stills and video to accommodate any shooting situation and should land locally in November for an approximate R15 000 retail price.