Of late we have been hearing much talk from Cisco,Toshiba, Samsung and now Motorola on the gap that exists for customised tablets in the business, enterprise and vertical industries markets.

With Motorola’s announcement this week of its new ET1 tablet, the company has taken another step towards filling that gap. According to Motorola, the ET1 is the “first in an emerging category of enterprise-class tablet computers designed for a variety of vertical markets.”

The Android 2.3 running tablet packs an OMAP 4 1 GHz dual-core CPU, which has become somewhat of a norm for the current generation of devices, along with 1 GB of RAM, 8 GB of internal storage, and a 32 GB microSD card slot. It also has a 7” capacitive screen with a 1024 x 600 resolution and Corning Gorilla Glass. The screen will also boast 350 nits of brightness, which is half that offered by LG’s Optimus Black smartphone.

According to the company, the screen is also set to be 30% thicker than most consumer displays and recessed to provide extra shock protection. The tablet will further boast an eight megapixel rear camera, and a front-facing camera designed for videoconferencing, along with 720p video capabilities. 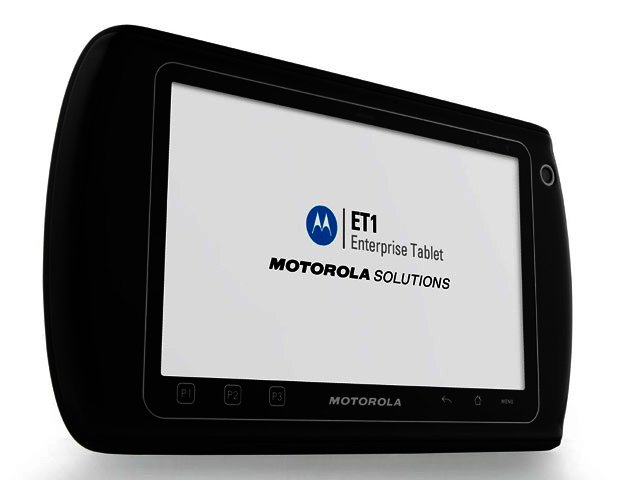 There are a number of features that distinguish the tablet as an enterprise focused device. These include enhanced durability, an optional barcode scanner and magnetic stripe reader, hot-swappable battery packs, and secure system software.

Motorola explained that the Wi-Fi-enabled tablet is intended for day-long use by multiple employees, and is password-protected so it can be shared and instantly provisioned for each employee according to his or her level of responsibility and access rights. Managers can further control and monitor use of approved applications based on log-in information.

Additionally, Bluetooth-connected handheld bar-code scanners, mobile-payment readers and mobile printers will also be available for the device, along with a recharging station.

Motorola elaborated that the tablet is initially targeted at the retail sector, and to this end, retailers will have access to a variety of exclusive applications developed for the device, such as Assisted selling and Mobile point of sale (mPOS) apps.

While we were impressed by the Motorola Xoom’s utilitarian ruggedness, we could easily see the potential for such devices to be catered for particular industries. One interesting aspect of the ET1 worth noting is that the design has changed considerably when compared to the Xoom. It appears far more in line with the images revealed for the Xoom 2, offering a curvaceous and more modern appearance.

At the time of writing, no local RRP was available, nor do we know when this will be made available to the South African market.
TAGS:
MotorolatabletsET1XOOM
USER COMMENTS