Market research firm Net Applications has made its latest monthly desktop browser stats available. Microsoft’s Internet Explorer (IE) had a good month, registering a slight increase of nearly 1% compared to February (52.84%), to tighten its iron grip on the lion share (53.83%) of the global browser usage pie.

Mozilla’s Firefox browser’s share remained relatively unchanged from February’s 20.92.% to
20.55% during March, as the fox continues to keep Google’s Chrome browser’s advances at bay. Like Firefox, Chrome also saw its share of the browser pie becoming stagnant, barely registering the drop from 18.90% during February to 18.57% for March.

After taking two steps forward in February, Apple’s Safari browser took one step back last month, decreasing its share from 5.24% in February to 5.07%. This seemed to be the general trend for the fringe browsers as Opera Software’s Opera also shed some users to see its stake drop from 1.71% during February to 1.62% during March.

According to a blogpost on Microsoft’s official The Windows Blog by Roger Capriotti, director of Internet Explorer product marketing, IE9’s user adoption rate on Windows 7-operating PCs continues to hit the up button on the browser stake elevator.

At the end of February Microsoft’s IE browser had surpassed the 30% usage mark for PCs running the Windows 7 operating system (OS) around the globe, and by the end of last month this increased to almost 35%. The most modern versions (17 + 18) of Google’s Chrome browser have overtaken Firefox as the second most popular browser utilised on Windows 7-running computers with its share of 21.2%, whilst Firefox 11 rounds up the top 3 with its 13.3% user stake. 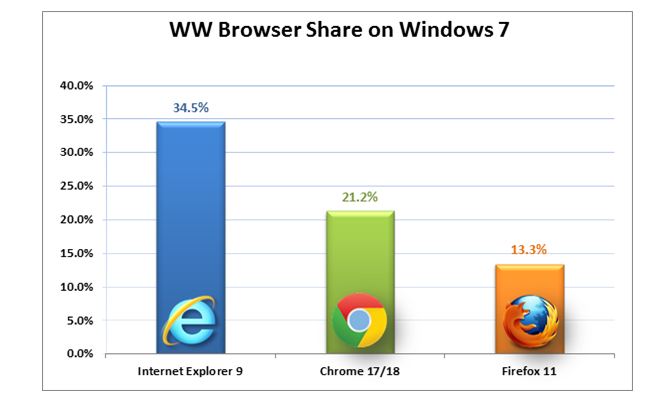 In other browser related news, Google recently made the latest stable edition of its Chrome web browser available for download. The release of Chrome 18 brings new functionality such as GPU-accelerated Canvas 2D and WebGL to the search giant’s browser.
TAGS:
GoogleMozillaAppleChromebrowser warsweb browser
USER COMMENTS