The arguments for and against portable consoles

With the recent announcement of the February launch date internationally for Sony’s forthcoming PSP Vita handheld, numerous technology and gaming sites are already debating the viability of a dedicated gaming console. It’s not a new debate by any means; and has only been spurred on by the popularity of the iPad and smartphones as gaming devices.

Opinions appear to be largely split into two camps. There are those who believe that tablets and increasingly more powerful smartphones, make dedicated handheld consoles redundant. On the other hand, there are those that feel that consoles, such as the 3DS and PlayStation Vita, still have their place in gamers’ hands.

Both sides actually have valid arguments. The former, like CNET’s Jeff Bakalar, assert that there is no room for portable consoles in a world in which all-in-one functionality is king. This camp’s main argument is that gamers on the go prefer a device that offers multiple functions, such as a tablet, asserting that there are a plethora of games available that are easily accessible and quite ably fill the mobile gaming needs.

To an extent, this opinion is undeniably evident. There are numerous lists populating the internet dedicated to best 10/50/100 games for your iPad/Android tablet or smartphone. Some of them are cross platform, such as the ever popular Angry Birds franchise. Others are exclusive titles that only increase on a tablet’s usefulness for those who love games as well. 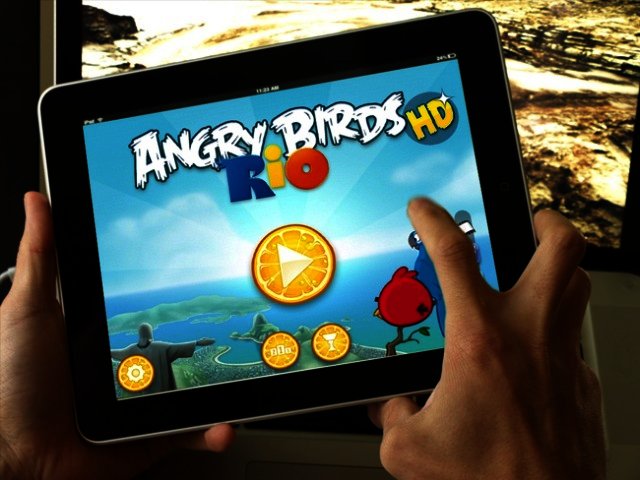 Angry Birds is not the only game on tablets, it is just one of the more popular
The Optimists

The console camp shows a bit more confidence in the future of the dedicated portable, such as Gameranx’s James Shepard, who argues that the PlayStation Vita will boast some outstanding hardware (quad core processors, a 5” OLED touchscreen) as well as integration with the PS3, that will help it prove its worth. At this stage of the race, tablets and smartphones cannot match the amount of processing that will be going into the Vita, making the Vita offer a far richer gaming experience, at least graphically.

Dedicated gaming hardware, such as the dual-screen approach of the 3DS and the PS3 controller buttons as found on the Vita, also provides for much smoother gameplay as for example on a touchscreen only smartphone. That said, smartphones such as the Sony Ericsson Xperia Play (review here), does show what can be done when smartphones go for a gamer-centric design.

Another gaming editor, IGN’s Colin Moriarty firmly believes that the PlayStation Vita is destined for success, pointing to a roster of high quality exclusive titles such as Uncharted: Golden Abyss, Resistance: Burning Skies, Sound Shapes, Gravity Rush, Super Stardust Delta, Escape Plan, and Ruin that will argue for its appeal.

Nor is Sony particularly concerned about missing the all important holiday season ahead of its launch date early next year. According to AllThingsD, John Koller, Sony’s PlayStation director of hardware marketing, has reported that there have been “substantial pre-orders.” He also cited that 60% of PSP owners have indicated that they would buy the Vita in the next 18 months, while 63% of PlayStation 3 owners have indicated an attention to buy the device.
Back on track

The PlayStation Vita is not alone in benefiting from some portable console optimism. No one can deny that the 3DS had less than a stellar launch, including Nintendo itself, which, in a first for the company, actually slashed the price of its console months after its release. However, the main culprit was simply a too small library of appealing games that justified the price tag.

Even though the quality and scope of Legend of Zelda: Ocarina of Time is, in our opinion, enough reason to own the device, it needed more, and this holiday season that is exactly what is forthcoming.  Mario Land 3DS and Mario Kart 7 are being launched before the year’s end, along with Kid Icarus, Resident Evil: Revelations and Kingdom Hearts in the near future.

Bronson Fiori, from the GamerAccess, points out that it was Mario Kart and Super Mario Bros which accounted for a surge in the DS’s sales. Nintendo’s reputation in general has not been to release a huge quantity of titles, but rather must-play titles that ooze quality and originality and offer a distinctive type of gameplay on its own.

In our opinion, both dedicated consoles and tablets and smartphones have their own place, and together they all make for a richer gaming environment. Each have some very tantalising and exclusive games on offer, which may well provide unique, valuable interactive experiences in their own right.

Arguing for the demise of dedicated consoles or ignoring the growing games market that mobile devices foster does neither side any favours. The diminishing of any of these platforms may leave gaming enthusiasts and the games industry poorer for it.The former could then end up regretting the decrease of variety and enjoyment, while the latter would be left with the loss of creativity and innovation that would surely result.
TAGS:
NintendoSonyPlayStation VitaNintendo 3DSiPadtablets
USER COMMENTS