After announcing a spate of improvements to twitter.com earlier in the year, microblogging site Twitter now turns its attention to its mobile apps for Apple’s iPhone and Android-powered mobile devices.

The company revealed that new versions of Twitter for iPhone (4.3) and Twitter for Android (3.3) are available for smartphone users to download from the App Store and Google’s Play Store respectively.

These latest editions of the social networking company’s mobile app includes new features such as expanded tweets, which provides users with more info and multimedia content on certain links posted to Twitter. If a user taps on a tweet that links to a Kickstarter project for instance, they will be able to view a video of that project directly from the details view within the Twitter mobile app. 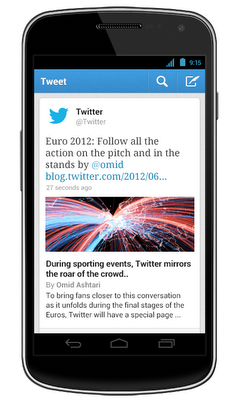 In addition, users will also be able to read article summaries when they tap on tweets which link to publication sources the likes of The Atlantic magazine, or view movies or photos if they  expand tweets that link to websites such as Vimeo. Twitter stated that the new expanded tweets experience will roll out gradually to web, iPhone and Android users.

Besides the expanded tweets functionality, the firm also enhanced the search autocomplete feature of Twitter, allowing users to see more suggestions when they search for other Twitter users. You will still be able to perform these searches by using either real names or a Twitter handle (@username).