A newly released device announced today, aims to bridge the gap between sketching on paper and drawing digitally. Wacom’s forthcoming Inkling, a digital sketch pen, will no doubt be of particular interests to artists and those who love drawing, conventionally or digitally. It enables users to capture a digital likeness of work made with its ballpoint tip on any sketchbook or standard piece of paper. The company explained that the device is designed for rough concepting and creative brainstorming, as well as a means of providing users another way to “rough-out” ideas with real ink on paper while capturing their concepts digitally for later development on their computer. Inkling further enables users to create layers in a digital file in Adobe Photoshop, Adobe Illustrator and Autodesk Sketchbook Pro.

While the pen is most clearly suited to artists, the company elaborated that it can be used by anyone who uses sketching to capture their creative ideas and wants to have their drawings in a digital format to e-mail, archive or further refine on their computer. The company explained that, for example, artists, illustrators, or storyboarders who appreciate the convenience, speed and spontaneity of loosely sketching their ideas on paper, could benefit from the capabilities of the digital sketch pen.In everyday use, a graphic designer could use Inkling to create rough concepts on paper for a new advertising campaign and then review and share these concepts on the computer with colleagues or clients, added Guido Moeller, product manager of professional brands at Wacom Europe. 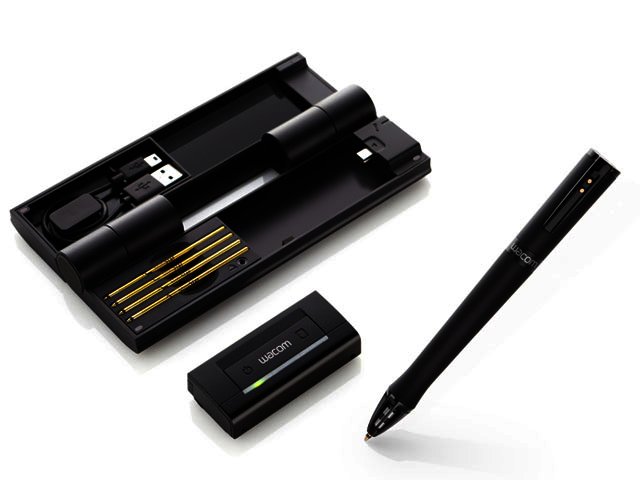 The Inkling digital sketch pen includes both the pen and a wireless receiver that captures a likeness of the sketch and stores it digitally. The ballpoint pen uses Wacom’s pressure sensing technology (1024 levels of sensitivity) to detect how hard the pen is being pressed to the paper while sketching, and these pressure variations then appear in the digital version of the captured sketch.

The receiver can be clipped to the edge of standard paper or sketchbooks and the position can be adjusted for left- or right-handed users. Then, when the user is finished, the receiver is connected to the user’s computer via USB to transfer the digital files. These can be opened with the included Inkling Sketch Manager software to edit, delete or add layers as well as to change formats and transfer the files for adjustment and editing in creative software applications.

Additionally, the company added that Inkling can store thousands of sketches and export layered files directly to Adobe Photoshop and Illustrator (CS3 or newer), as well as Autodesk Sketchbook Pro (2011). Alternatively, files can be saved in JPG, BMP, TIFF, PNG, SVG and PDF formats for use with other applications. The Inkling sketch pen is priced at 149.99 GBP (R1720) and will be launched in October 2011 onwards. South African availability has not yet been confirmed.