BlackBerry’s Touch Awesomeness competition enters its second week, this week calling for entrants to let their fingers do the talking.

Last week we were forced to put our dreams of a rockstar life to bed and admit that writing tech news was our only calling. This was the conclusion after completing the first week’s Record Your Song challenge of the BlackBerry Touch Awesomeness competition.

The second week’s task is called Fingers of Awesomeness and it provides entrants with the chance to set a dramatic, romantic or amusing scene using their fingers as the characters. You can draw or paint faces on your fingers, or pimp them out in mini-me outfits and props, along with setting up a creative background to capture this scene via your phone’s camera. Then you simply upload the photo to the site, adding another ten points to your competition tally and watch the votes role in (or so we hope).

After taking a photo of our “It’s the weekend baby!” scene with our smartphone, we quickly and easily uploaded it to the competition site. We also uploaded the photo to our Facebook photostream to test out the feature that allows competition entrants to use one of their Facebook photos, instead of having to upload a pic. This worked just as well and gave us the chance to ask our FB friends to vote for our photo. 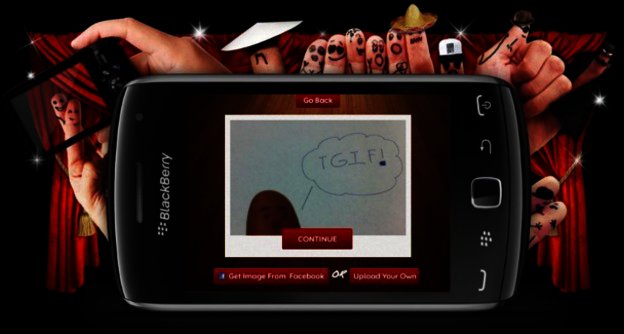 About the BlackBerry Touch Awesomeness competition

BlackBerry’s browser-based competition has entrants completing ten tasks of “Awesomeness” on a weekly basis, giving them a chance to net one of ten all-touch BlackBerry Curve 9380 smartphones. One of these sleek new offerings will be up for grabs each and every week.

Besides the chance to net an amazing new BlackBerry Curve smartphone, entrants will also earn a set amount of points for completing each week’s task. The person with the most points at the end of the ten weeks, will be able to park a brand new Audi A1 1.4 TFSI in their garage at home.