To say that this title has been “hotly anticipated” is akin to saying that the invention of the wheel was a minor distraction in the rise of human civilization.
When the game was announced back in 2007, geeks around the world cried out in unison and Diablo III’s release has been set in stone as the hallmark of the 2012 gaming year ages in advance.

The difficult thing with owning a gaming property worth its byte count in refined platinum is that expectations for the sequel will undoubtedly be set high, perhaps unfairly high in many cases.

But unlike the norm for trilogy titles, Diablo III hasn’t been rushed through development to feed the dollar monster. Instead developers Blizzard made us wait for this game, made us beg, made geeks salivate uncontrollably by releasing trailers and gameplay snippets years before the game actually came to be. All this had the effect that by the time the game was actually released, gamers flocked to stores as if Blizzard was Pavlov and we were a pack of malnourished dogs.
So let’s get down to it, does Diablo III live up to the incredible hype machine built up around it? 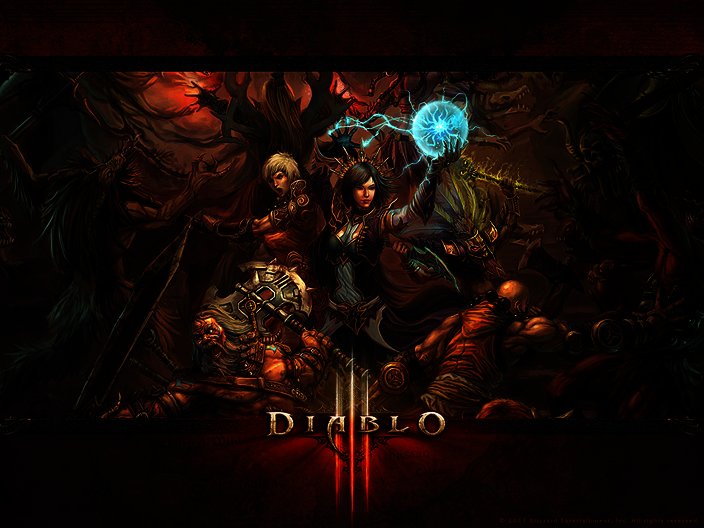 Not exactly The Get-Along-Gang.
Story

Most sentient organisms that have referred to themselves as “gamers” have played or at least experienced some of the magic of the previous Diablo titles. That being said, a brief synopsis of the epic storyline is needed nonetheless.

Diablo’s story focuses on humanity’s desperate struggle for survival as they are buffeted around in the endless conflicts between the forces of heaven and hell. Centuries ago, the world of Sanctuary (the human world) was created by a rebellious group of angels and demons seeking to escape the bloodshed.
Peace persisted for a time, and their offspring became known as the “nephalem” (or humans), a race which has the potential to harbour both good and evil powers.
Eventually though, the world of Sanctuary was discovered, and realising that humanity could shift the power balance in their war, heaven and hell agreed to not intervene directly in mortal affairs. This deal however, did not last, and before long the prime evils themselves were marching across Sanctuary.
In Diablo III we return to the age-old battle. Although Diablo and his brothers were defeated and trapped in Diablo II, the two remaining high lords of hell have declared war on the beleaguered human world. Belial the Lord of Lies, and Azmodan the Lord of Sin, threaten to destroy the mortal world once more and take possession of the trapped souls of the prime evils. Meanwhile in heaven, dramatic events are unfolding as the Angels bicker over whether to save or destroy humanity.
First things first though, it’s time for us to pick a hero… 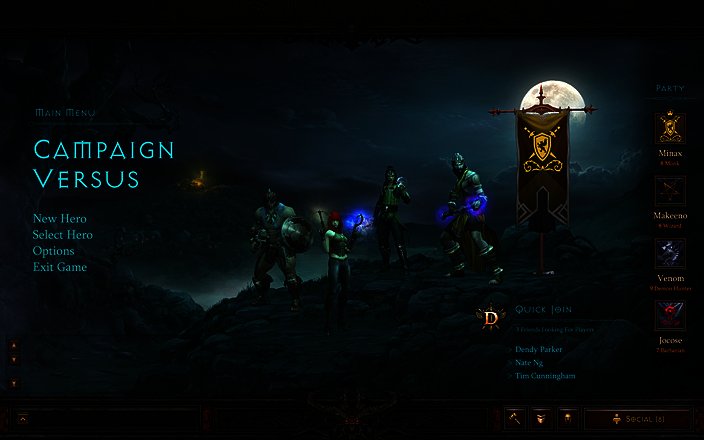 Known for their "odd" behaviour, the Diablo four were always last to be picked for the playground soccer team.
Classes
Diablo III gives players five heroes to choose from to battle the forces of hell. The rampaging Barbarian returns from Diablo II, wielding axes, swords, maces and telephone poles to beat hell’s minions into a pulp.
The Sorceress from Diablo II is reincarnated as the Wizard, utilising a barrage of elemental and telekinetic magic to blast away any foe in sight.
The game’s third class is called the Monk, a holy warrior mixing a divine soul with blinding speed and bone crushing power to devastate any in its way.
The Witch Doctor on the other hand prefers to fight by summoning frightening creatures to do its bidding, as well as using a combination of poison, flame and horror to give even the most experienced demonic soldier a run for its money.
And last but definitely not least is the Demon Hunter, specialising in the methodical trapping and slaying of the occult and employing a series of ranged weapons and traps to outsmart its foes.

Gameplay
After firing up Diablo III and gawking at Blizzard’s signature cinematic sequences, players are dropped into the outskirts of New Tristram, the town devastated by the Lord of Terror in the first game.  A fiery “meteor” has fallen from the sky and crashed into the abandoned cathedral, causing our hero to travel to the town to investigate.
Starting out in the wilderness, players are introduced to the game’s first enemies barely three seconds in, with undead feasting on the remains of slain townsfolk. These shuffling monsters present no real threat and can be easily dispatched by left-clicking to utilise your heroes’ primary attack.
Throughout the first Act of the game increasingly difficult enemies are revealed, and players become more and more powerful as their characters are levelled up. When your character gains a level, players are given the option of choosing new skills for them to learn, and are free to switch between skills at any time. These skills are controlled by default through the two mouse buttons and number keys 1-4 on the keyboard.
Attributes such as strength or intelligence, however, aren’t player-controlled anymore, and will automatically increase as your character becomes more battle-hardened. Some RPG fans may see this as taking away some of the customisation of the game; and while it annoyed us slightly at first it’s something that is soon forgotten. The reasoning behind this decision is probably related to lessening the character creation burden on novice players, and instead allowing you to engage in battle in a peak, balanced state at all times.
Combat in the game is similar to its predecessors, but feels much more visceral this time around. There are few things more satisfying than watching demons burst into bits as you psychically blast them away with the wizard, or seeing their limbs fly as they are hacked to pieces by the barbarian’s whirlwind strikes. 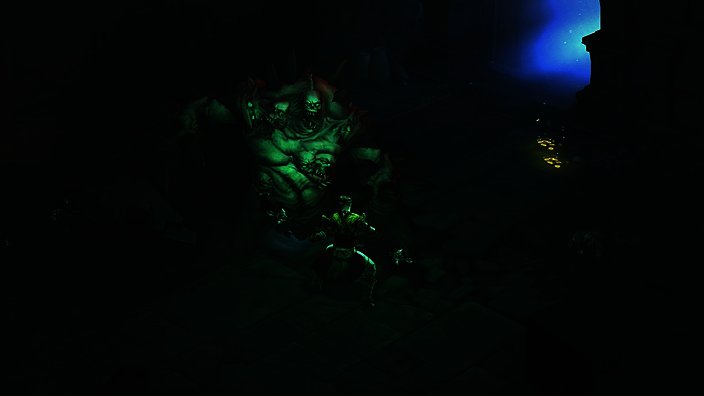 Sorry madam, I refuse to do any more plastic surgery.
Health and mana
The potion system from Diablo II has been largely cut in favour of a system where slain enemies randomly drop health globes which can be consumed for a life boost. This makes the action a lot faster paced, and takes away the need to spend most of your gold at the potion master’s cart.
In addition to health, all characters also have access to a unique system of “energy”, used for casting spells and utilising abilities. For example, the Wizard and Witch Doctor uses “arcane power” and “mana” respectively, a quickly regenerating energy reserve which they can use to cast spells with. The Barbarian on the other hand makes use of a resource called “fury”, which slowly diminishes unless the Barbarian engages in combat. Each strike that is dealt in battle will boost the Barbarian’s “fury”, allowing him/her to unleash their crushing abilities against foes.
The Monk uses a holy resource called “spirit”, which acts in much the same way as the Barbarian’s, charging up with multiple strikes. The Demon Hunter is the only character that uses twin resources, called “hatred and discipline”. Using basic combat skills depletes “hatred”, a quickly recharging resource used in the most directly offensive styles. “Discipline” on the other hand recharges much slower, and is expended when the Demon Hunter utilises their more tactical and calculating strategic abilities. Laying traps for example, will deplete “discipline” while firing barrages of arrows at stampeding enemies will deplete “hatred”.

Items and difficulty
While your level and skillset undoubtedly moulds your character, it’s the gear in the game that forms the icing on the cake. Players can collect gear from fallen monsters or buy them at shops, and this time around crafting your own gear is a very satisfying mechanic as well. Items are divided into different categories, from normal to magical, to rare and legendary items fit for none but the god of war himself. It’s this addictive item collecting that drives players to keep playing years after they beat the original storyline.
Diablo III also features multiple difficulty levels, each one being unlocked by completing the game on the previous setting. All players will start out playing on normal difficulty, but after beating the game once the monsters are given steroid injections, the items are made shinier, and more “champion” monsters are introduced to make your next playthrough considerably more difficult and more rewarding. After normal the difficulty levels in the game are known as nightmare, hell, and inferno.
At the time of writing we’ve completed the game on normal difficulty and have made considerable progress in our nightmare playthrough alongside some friends, and trust us, things get ugly very quickly. Some players may not be attracted to this kind of replayability, but for Diablo fans it has always been an aspect of great enjoyment.
During the later difficulty levels players are freed from the immense gravity of the storyline, and are free to craft their characters to perfection. Rare items drop more frequently, gold drops increase, and monsters which you scoffed at during your first playthrough will turn into considerable adversaries. And everyone knows that when the PvP (player versus player) servers goes live, your nightmare, hell, and inferno experiences are going to make attaining victory that much easier.
Presentation
Early on in development a number of fans criticised Diablo III’s visuals, stating it lacked the violence and gore that gave previous titles such impact. We are happy to report however, that while the world of sanctuary is undoubtedly more colourful this time around, it only serves to make the blood splatter that much more visually striking.

Overall the graphics fit nicely with the action, and the inclusion of a full-blown physics engine makes the world feel much more “alive” than in previous iterations. Destructible objects litter every environment and even mundane objects such as cloth wall-hangings react to your presence.

Diablo III is fully playable with up to four players, with the difficulty level rising considerably when an ally joins your ranks.

We’ve already enjoyed several hours of team-based dungeon crawling with our friends, and once the PvP servers goes live the entire experience is sure to become even more addictive. On that note, the PvP arenas are as yet one of the few sour points to the Diablo III experience, simply because they haven’t been released yet.

Blizzard announced a few months ago that they weren’t yet satisfied with the system, but didn’t want to delay the entire game for its sake, and thus the decision was made to release D3 without it. The system will be released in a patch at an unspecified time, so until then players will simply have to get their fill from levelling up their characters, and keep their rage in check until the skull bashing arenas are finally released.

When it does hit though, the PvP patch will add multiple new maps as well as special achievements and a matchmaking system that sounds similar to the one found in Starcraft 2. PvP arenas will also be playable in teams, which is something we simply can’t wait for. 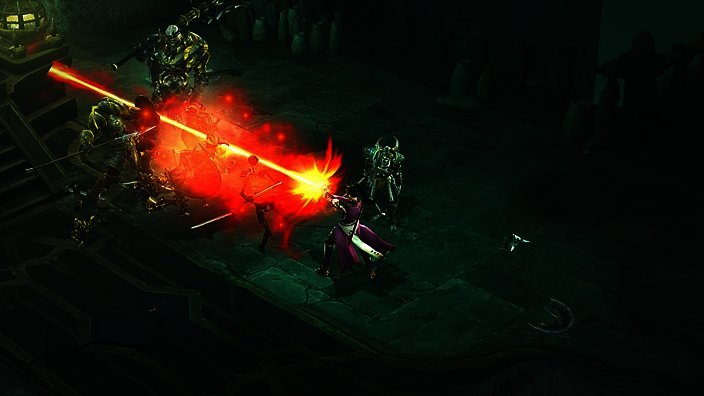 "So, where did you get your laser pointer?"
Conclusion

Diablo III is what every action role-playing game aspires to be, and from start to finish it has not disappointed. A few bugs remain in the game, and some players have reported connection issues, but these will hopefully be patched quickly by Blizzard. The game also runs on a wide variety of rigs, including the humblest of laptops and even Macs.

Diablo III is everything fans of the series have been waiting for, and from initial feedback appears that it will keep gamers busy for years and years to come. If you buy one game this year, make sure it’s this. Keep in mind that you need to be connected all the time to play.

Pros: Gameplay is amazing; crafting your own gear great; playing with friends is excellent; massive nostalgia value.
Cons: You have to be online; Error 37; quirky loot system; legendary items are sometimes worse than rare items.