The Star Wars: Uprising mobile RPG is here, but is The Force strong enough with it to make it worth your time?

As Star Wars anticipation mounts, with Star Wars: The Force Awakens being just three short months away, a small vanguard of novels and a mobile game have landed. The latest of these to bridge the story between Star Wars Episode VI: Return Of the Jedi and the forthcoming movie is Star Wars: Uprising, a free mobile game now available, in fact a day early, for iOS and Android.

From the opening music, to the scrolling introduction, the game at least at first blush does exactly what I hoped it would, transporting me to a galaxy far, far away. However, what does become clear is that this is not in the same ilk as Star Wars: Knights of the Old Republic, also available on mobile devices and which I cannot recommend highly enough. In that game, your progress and initiation as a Jedi was the focus; in this one, it’s more about exploring the seedier side of life in that galaxy.

The game firstly lets you choose from a few races, at least right now, including male or female humans, Zabraks, Twi’leks, and Mirialans. The mobile game’s story takes place shortly after the Battle of Endor. Emperor Palpatine is dead and so is Darth Vader, but that doesn’t mean the Empire isn’t going to do its damndest to keep citizens in the dark and its own malevolent aspirations alive.

Such is the case on one of the sectors, in which Imperial Governor Adelhard has an even worse relationship with the truth than Fox News. Thus, he orders an immediate blockade be established to prevent its citizens from learning the truth, and makes spreading any news about the Emperor an act of treason. 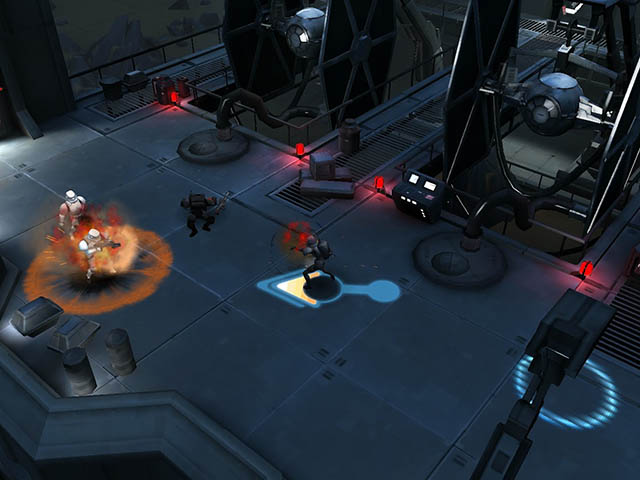 Holding out for an antihero

On one of the planets, Burnin Konn,  you find yourself, a Han Solo-esque smuggler, along with your sister, both of whom have a penchant for courting trouble and shooting first (or not shooting first, depending on where you sit with the issue). As smugglers are wont to do, it seems you have disappointed your crime lord boss, the humorously named Happy Dapp, losing a valuable shipment of explosive crystals. Suffice to say, Happy Dapp is a not a happy chap, at least not with you, and you end up having to work off your debt by taking miscellaneous missions.

This though, really sets the scene for the game’s dynamics to come into play. From the perspective of a three-quarter top down view, you tap on portions on the map to move to them, tap on enemies to fire and tap on crates and objects to interact. However, where this gets interesting is that you swipe in different patterns to engage your special abilities, such as a rapid fire burst of blaster fire, or the ability to knockback and stagger opponents. Moreover, as you progress you can not only level up your character and abilities, but your equipment as well. Of the latter, there is plenty, including weapons and armour for different parts of your body as well as components.

The game is free to play, which of course means it supports in-app purchases. These range from R70 to R400 for Chromium, the game’s currency used to unlock more slots in your inventory and other features.

There are a couple of things I am not crazy about, such as the ongoing chat, as you would typically find in MMOs and no way to hide it. Secondly, the dialogue is a bit hit and miss – the characters spurt out random phrases, that don’t match with the subtitles in the speech bubbles. Some of the voices are better than others, ranging from very good, to ok and occasionally to sounding as though they have been read by a machine.

Nonetheless, the game definitely seems to have potential. The storytelling seems off to a good start, and apparently there is a multiplayer participation that could well drive the direction of add-ons and the story itself. That I suspect, will come more to the fore later. In the meantime, Star Wars: Uprising seems to be a game you may well want reserve the required 600 MB for.