There is much to like about the Synology DiskStation DS218+, starting with its terrific ease of use to set up and use. Put simply, network attached storage devices can be intimidating on both fronts. If you have nightmares about configuring IP addresses and having to set aside a good portion of your day for the privilege of having your very own server, then you may have skipped a Network Attached Server (NAS) in favour of an external hard drive.

(For a quick primer on what makes NAS so useful, click here)

However, the DS218+ takes all the pain out of the process. To begin with, installing the drives themselves do not even require a screwdriver – thanks to some clever design you just  slide a hard drive into one of the two bays, clip the side mounts into the drive tray and slide the mounted drive into the bay. On the hardware side, all you need to do is plug it into the wall and connect its included ethernet cable to your router.

Then, setting the drive up to be read requires pointing your phone at a QR code, downloading an app and following a few prompts. The rest is done in the background for you – the drive is formatted, the Synology DiskStation OS is installed and you receive a notification when it is ready for business.

It’s not our first rodeo with a Synology drive – the last one we reviewed was back in June of last year and even then the device impressed. But the DS218+ is considerably more compact, mainly because it has two drives instead of the DS 418 Play’s (review) four, which makes it ideal in situations where space is a premium, or you just want your personal server to be as inconspicuous as possible. The DS218+ is certainly that. Essentially, it looks like a smalll black box. Apart from the few coloured lights that let you know power is on, a connection to your network is established and the hard drives are working as they ought, and a few USB ports, that's about it.

At this size, you could ask why not just use an external hard drive or the public cloud instead? There are a few compelling advantages that a NAS offers – particularly if you are travelling and want to access the same personal data from several devices. With the DS218+ I could access documents, music and video on my iPad, smartphone, and notebook computer, with them stored in one secured data storage place that is always available.

As well, with data breaches happening more frequently now, there may just be some information you don’t want to store on your Google Drive, iCloud or Dropbox in order to access them universally. 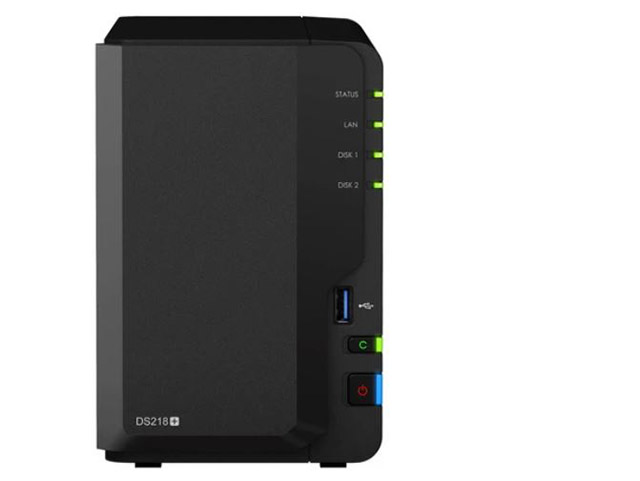 After living with it for a while, there are two questions, one easy and one difficult, that it poses. The first: should you get one? That’s easy, yes. It, like an Amazon Echo, becomes a part of your digital landscape that genuinely offers some worthy benefits. The second question to answer is much more difficult – should you opt for this 2 bay but more compact NAS or get the larger one that has 4 bays?

That is going to depend on just how much storage you envisage needing, and what exactly you want to store. If you are a general home user, have a library of music, videos, documents and the like that you want ready access to, I don’t think you will regret opting for the DS218+. Bear in mind too that if you need more space you can always just buy a larger drive to plug into it. As well, you can also just plug up to two external hard drives into the device, and access those through the DiskStation’s companion app. That is exactly what I did and it worked like a charm.

If, however, you are a power user, a small or medium business or anticipate your NAS storage needs growing exponentially, you may want to rather look at the four bay option.

Either way, the advantages are the same. There are a variety of applications that you can download and install onto the NAS that extend its functionality. These range from an iTunes server, email or web server, store app to store and share  notes, and full Office suite to a surveillance app which enables you to connect cameras to your network and then view video feeds from anywhere.

These packages makes it considerably more feature rich than just plugging in some extra storage. Not that having extra storage is anything to sniff at. I particularly appreciated the fact that I could have somewhere to store reams of photographs that are accessible from multiple devices without having to take up space on my notebook, iPad or smartphone. 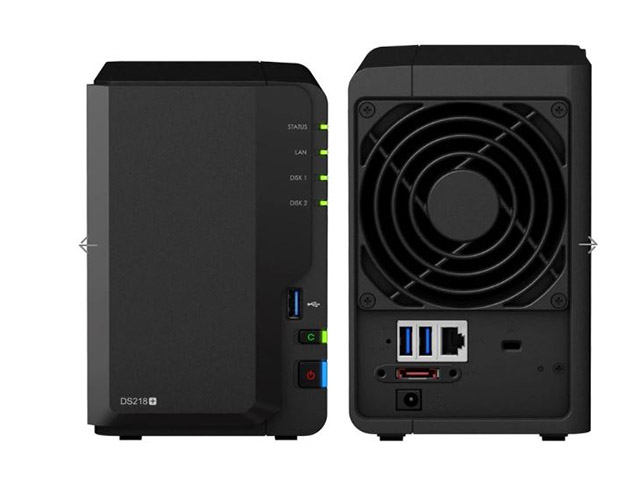 For business users, there’s another scenario I could see the NAS serving as a potent backup tool - for those instances where you are travelling, at a conference and run out of storage on your notebook. When you simply don’t have time to go through files that you may or may not want to get rid of, offloading them to a capacious personal storage device of your own, rather than the public cloud, offers a safer and more viable alternative.

THere are no doubt, more advantages that I will be discovering as I incorporate the DS 218+ into my life. That perhaps is the biggest advantage a NAS offers over an external storage drive. WIth the latter, you largely set it up and forget about it. With a NAS, there's a ton of discovery as to how useful it can be beyond the immediacy of offering extra storage.

Simply put, the Synology DS218+ NAS is a handy addition to one’s digital life and the increasingly connected home. At around R5 700 to R6 500 it isn’t cheap (but do shop around), but it’s still well worth it if you want to get on top of your data management, and really optimise how you can access your media and critical files.