Following Michael Dell’s comprehensive keynote, it was also the pillar that Jeremy Burton, the executive vice president and chief marketing officer, discussed more in depth. It was also the component of digital transformation that I later took to the Solutions Expo to explore in a more hands on way.

First though, Burton began by pointing out how comprehensively technology has changed the workforce since 1987, back when processors ran at 12 MHz and computers were powered by 124 transistors, a  measly 1 MB of memory, 20 MB of storage, and its users considered a 10 megabit per second hardwire connection to be “awesome”.

Fast forward thirty years and working on notebooks is commonplace, with people having access to PCs that are a staggering 375 000 times faster than they were in 1987. We also enjoy up to a whopping 64 GB of memory, and a 12 hour battery life in a mobile device is the norm.Clearly we have already lived through one workforce transformation driven by technology, even as we are in the midst of another one.

Burton noted that due to the advancements made in technology, work is no longer a place, it is an activity. “Because bandwidth speeds have gotten faster, PC’s are no longer tethered, people work anywhere, anytime and they work on any device,” he added. To this end, Dell EMC debuted its first wireless charging Latitude two-in-one notebook, which is set to launch in the US in June, although no word was given as yet with regards to international availability.

Returning to the point, Burton stressed that the role technology plays in the workforce has become a crucial factor for businesses to cater to. This, as 82% of millennials entering the workforce cite access to new technology as a factor in the job they take, and half of CEOs believe that tech is critical to attracting top talent.

However, workforce transformation is not just about the technology, as Burton noted that the company is also seeing the way businesses buy technology is changing, with many starting to procure PCs as a service. “This has a huge benefit, as it means we can get technology into the hands of users quicker and the hard work of managing those devices can be left to Dell,” he enthused.

With all this mobility comes the ever present and always critical concern around security, with Burton stressing that data has to be protected wherever it goes. He acknowledged that, much as it was ten years ago, endpoint protection (where the worker interfaces with the company’s network) is still a big issue, with 95% of all breaches starting at the endpoint. The most recent case in point of this is the notorious WannaCry malware virus, which spread from PCs that were still running Windows XP.

“Now that we are part of Dell Technologies, we can protect users’ data using Mozy, implement two factor authentication using RSA and manage all those endpoints using Airwatch,” he reassured. 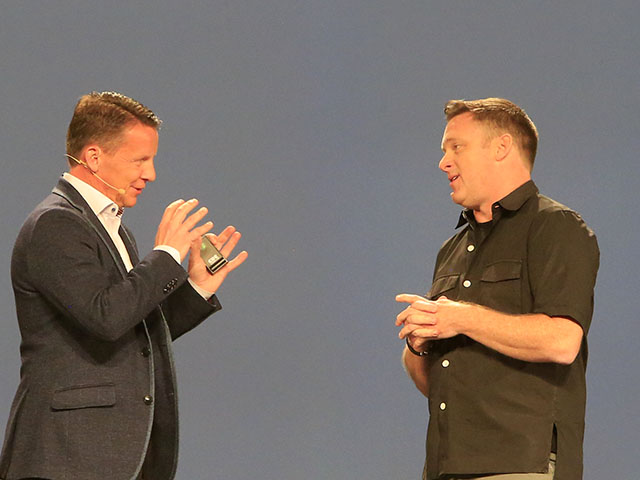 With the importance of transforming the workforce addressed, Burton then turned to the really exciting stuff - the future and real world examples. He enthused that as technology improves by a factor of ten every five years, in fifteen years time we will have a thousand times the speed, capacity and efficiency that we currently enjoy. This will likely translate into more natural ways of working and collaborating, with virtual and augmented reality playing a significant role in each.

Additionally, Burton predicted that devices will become predictive and intelligent, adding that as we move towards the IoT, machines are going to do work on our behalf. Furthermore, it turns out we can look forward to more immersive creativity.

Granted, this may sound exciting enough, but what is it actually going to look like in real world scenarios? Turns out, Dell EMC World had a particularly recognisable example, in the form of Nike, to demonstrate how Nike is already using digital canvasses and haptic technology to design new products faster and create virtual models that can be felt before they are produced.

Ken Black, VP of Digital Design Transformation at Nike, explained that the company has a nearly 1000 strong team of designers who enjoy access to some of the best athletes on the planet, along with extensive data and performance information. “This has lead us to the fundamental question as to how get the brilliant ideas that exist in our designers heads out and into the world faster, more seamlessly and more beautifully,” he related.

To this end, the company demonstrated how it is integrating Dell Canvas into its workflow, and how it anticipated using augmented and virtual reality as well. Rather than try explain the demo, take a look at the video below for a clearer picture.

Additionally, Black revealed that the company is already designing products well into the future, for the next Football World Cup five years away and even the Olympics in seven years time. “The fact that we are designing for the future means we need tools here and now that enable our designers to their imagination to make those designs real ahead of time. Being able to design in 2D and have athletes view the product in 3D will really change the game,” he concluded.

More than just the interesting technology, it was the vision of how work in the near future may be different because of what is happening now that really intrigues. That, if nothing else, is what makes the digital transformation that Dell EMC spoke of at Dell EMC World so compelling.