How do you fight back against anti-feminism critics? You get the new female Thor to beat them senseless and show she's just as formidable as her male counterpart, that's how. We first covered Thor's change to a female character last last year, which as expected garnered plenty of criticism from some ignorant people out there. The main bone of contention, revolves around the fact that Thor is the god of thunder, and as such is believed to be male. 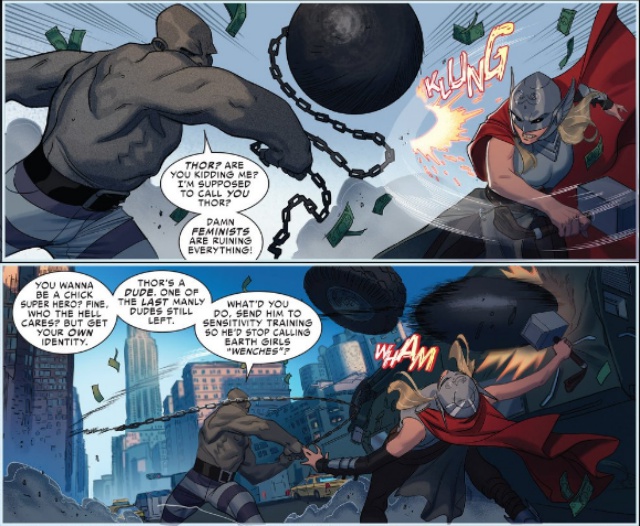 To fire back against critics, Marvel used some pretty sound logic. You see, Thor (male or female, it doesn't really matter) is imbued with god-like superhero powers thanks to his mystical hammer - Mjölnir (pronounced MYOL-n(ee)r by those unfamiliar with their Nordic dialects). As Odin famously said, the power of Thor can only be wielded by one who is deemed worthy. So who is the new female Thor? It's is (SPOILER ALERT!) Freyja, Odin's wife and the all-mother, which makes her pretty worthy in our books.

Now that we've digressed a tad, let's get back on track. Marvel used the new female Thor as a platform to address anti-feminism in pop culture the only way they know how, through comic books. In Thor #5, the goddess of thunder takes on an enemy who hurls all kinds of abuse at her, invoking the same kind of narrow-minded views as real-world anti-feminists do. To deal with him, Thor breaks his jaw with an impressive uppercut, and gives him a proper good hiding. 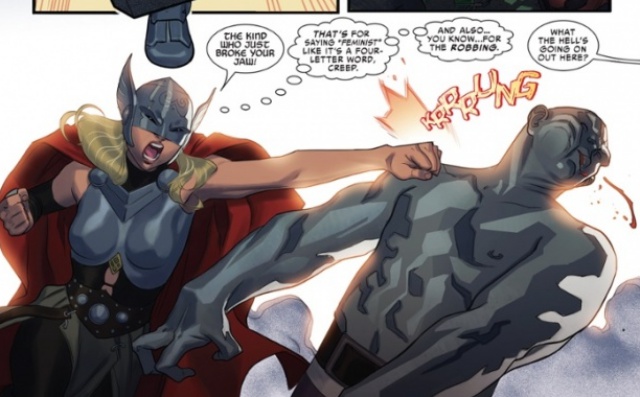