Google I/O is undoubtedly one of the the company's biggest annual events, and this year's event did not disappoint, as the San Francisco-based organisation offered plenty of new software and product announcements to keep developers and Android fans clamouring for more.

One of the main themes during this year's conference, is the ability to offer a seamless Android experience on a variety of different form factors, whether that be one's smartphone, PC, notebook, TV, car or wrist. In order to address this need, specifically when it comes to an Android interface on a user's wrist or in their car, Google showcased Android Wear and Android Auto in finer detail.

Android Wear is a development that we initially previewed in March, and marks Google's increased efforts within the wearable market. This is an area that has seen large investment from technology manufacturers, but still struggles for a purposeful role within the greater spectrum of technology. Hopefully Android Wear is able to change all that.

As far as devices go, we were already aware of the LG G Watch and Motorola's Moto 360, both of which were demoed at Google I/O, but Samsung too, debuted its competitor in the Android Wear sphere with the Gear Live. These three devices are tipped to be the benchmark by which Apple's fabled iWatch will be measured, adding to the importance of dominating the impending wearable arms race.

Android Auto is also a development that has been rumoured to be in the works for quite some, with Google now partnering with a number of car manufacturer's such as Ford, Volkswagen and Hyundai, to bring its interface to the dashboard.

This in-car infotainment system, which too was showcased for Google I/O attendees, features a similar look and feel to Apple's CarPlay offering. Users will have the ability to connect their Android smartphone (although software compatibility was not disclosed), and utilise services like Google Maps, Google Play Music and voice-activated software control.

Added to these new ventures, Google is aiming to heat up the living room battle, with Android TV. The living room is an area that Google has had very little success in the past, but the release of its Chromecast streaming device changed a lot of that, now Google is looking to build on the momentum with the debut of Android TV. This is achieved through a newly designed set-top box, that will offer a range of services quite familiar to Xbox Live users.

These services include the ability to stream live TV shows, as well as download and view movies from Google Play and third-party applications. Users will also be able to play a host of Android games which have been specifically enhanced and scaled for the larger screen size that a TV offers.

The last notable announcement saw Google giving a sneak peek at its latest Android OS, codenamed Android L at this stage, although we're putting our money on Lemon Meringue. Based on initial impressions, it appears as if Android L will feature a newly refreshed OS, that will attempt to provide the same look and feel across various platforms, according to Google.

Some of the features that Google is touting with Android L are its newly designed Search function, which will attempt to provide a more visually compelling presentation when searching for historical figures or pieces of artwork. Android L will also integrate a Google-specific battery saving application, that Google say can add up to 90 more minutes worth of overall use. Unified tabs for easier multitasking is another area addressed in Android L, with a feature called "recents", that merges all Chrome tabs and recently used apps into one carousel. 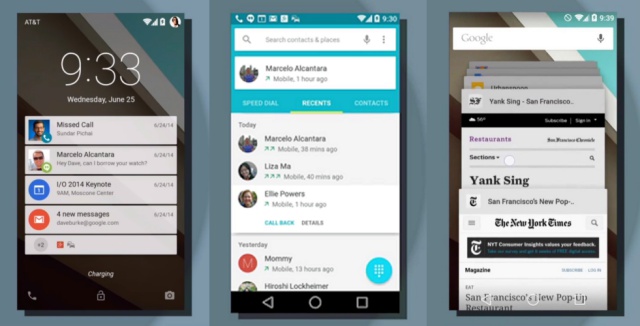 With the first day of Google I/O done and dusted, it appears as if Google has come out swinging, with a host of important software and product announcements that developers will be excited to get their hands on. It's also great news for Android users, who can look forward to a range services and gadgets appearing in the coming months. We'll be sure to keep the updates coming, and ensure that all Phandroids get their fill.