Jeep Chief Concept is blast from the past

When we heard that Jeep were working on a new concept car, we had no idea it would look like this. The Chief Concept seems to almost buck the current trend among 4x4 concepts at the moment, drawing more inspiration from past Jeep models, as opposed to looking like a futuristic SUV. As any 4x4 fan from the 70s might recognise, the Chief Concept pays homage to the Cherokee model of the same name, and as such looks as primed to head to the beach as it does off-road. Designed specifically to showcase at this year's Easter Jeep Safari event (28 March - 5 April), held in Utah, the Chief Concept certainly turned more than a few heads thanks to its razor grille and sky blue paint job. 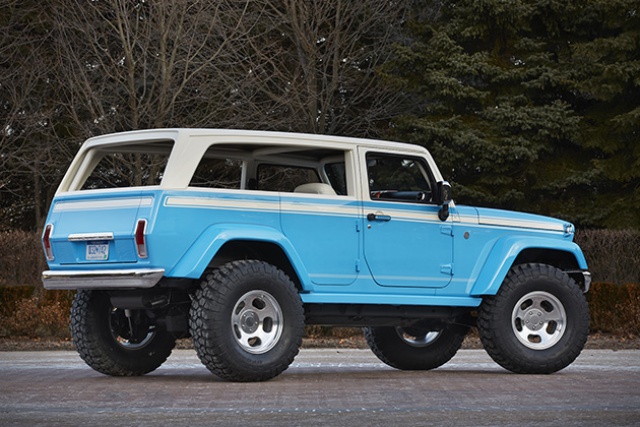 Back to the future

It also stands quite tall, courtesy of its large 37" tyres, and allows the driver to sit well above the competition. An inspection of its bonnet will reveal a 3.6 litre Pentastar engine, akin to that seen in the current range topping Jeep Grand Cherokee. The V6 engine also sports a number of Mopar performance parts to bring the most out of the Pentastar engine and six-speed manual gearbox.

Along with its unique ride height and front end stylings, Jeep has also adopted a different design for the Chief's cabin and rear, with a custom C-Pillar being incorporated to highlight the long rear window setup. As such, the cut-out back look is reminiscent of the Jeep Wrangler Unlimited and should provide a fantastic viewing experience for those situated in the back. 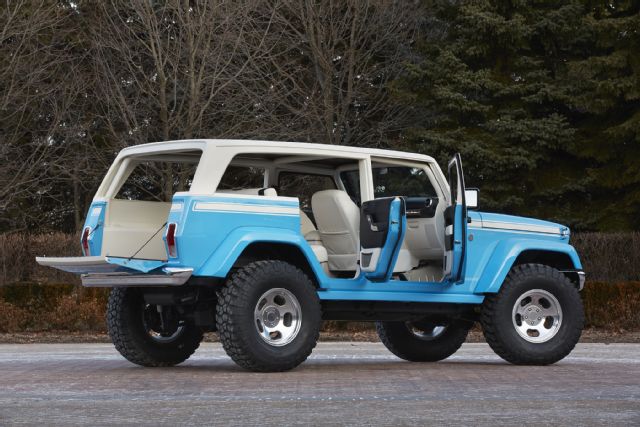 The Jeep Chief Concept is one of seven cars/4x4s being showcased at the Easter Jeep Safari, which runs for nine days as media and guests alike are treated to exclusive rides in some new concepts, as well as retrofitted current models to highlight the innovations that Jeep are working on. As far as whether or not the Chief Concept will become a road-bound reality, little is known, but gauging by the response it has already received, a production model could well be in the works.