LG recently revealed its new flagship phone for 2018 with the G7 ThinQ, but now the South Korean company has unveiled its devices aimed at the mid-range market with the Q7. Like previous devices from LG, the Q7 trio take several design and feature elements from the G7 and places into a slightly smaller and cheaper form factor.

To that end they sport a thin bezel up front for its 5.5" Full HD display (2160x1080), which is paired with an aluminum unibody and rear mounted fingerprint sensor. At this stage, the make of the processor powering this offering is unknown, with LG only stating that there's a choice between a 1.5 GHz or 1.8 GHz octa-core chipset. 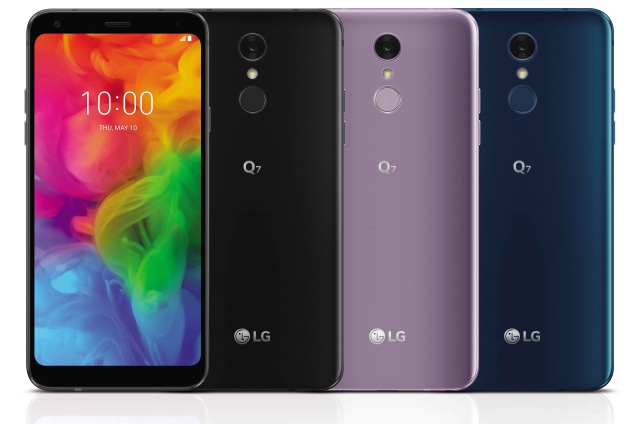 As far as other internal configurations go, they will depend on the model of Q7. The standard version and Q7α have 3 GB RAM, 32 GB onboard storage and microSD slots for up to 2 TB extra. The Q7+ ups things to 4 GB RAM and doubles storage to 64 GB with the same microSD capacity.

The specs differ for each model when it comes to camera too, with the Q7+ featuring a larger 16 MP primary shooter and dual front facing lenses. The Q7 and Q7α have the same 13 MP shooter on the rear, but the latter only has one front facing option compared to the other's duo.

On the AI front, the Q7 trio feature LG's QLens functionality which is designed to give users purchasing info on any item they've captured. Added to this is image search capabilities that will bring up similar looking objects that appear in the Q7 devices' camera modes. It's not quite on the same level of the ThinQ platform though, so users will have to look elsewhere for AI on a mid-range phone.

It's unclear if all three options will be landing locally, but South Africa is likely to see only the standard Q7, which LG opted for with the previous iteration of devices. No word on cost or availability yet.