We're now two weeks away from LG officially unveiling its new flagship - the LG V30. In a bid to ensure consumers remained intrigued by the forthcoming device, the South Korean manufacturer has been drip-feeding the media tidbits about the phone. The latest piece of information out of the LG Newsroom sees a better look at the V30's user interface, showcasing how it will appear unlocked and with the second screen in action.

The former looks a lot like the LG G6's setup, with the company's UX layered atop an Android Nougat operating system. While similar to the G6, the V30's interface appears to be a bit cleaner, with a tab tucked away on the right hand side for regularly used apps like contacts, settings and memos.

Added to this, although not seen in picture, is Graphy. For those unfamiliar, it's a tool accessed via the V30's manual camera mode, and serves up a number of shooting options. With Graphy, users will also be able to download images taken from a portfolio of professional photographers, and apply certain styles they implement. Consequently, Graphy could allow users to imitate the look of a particular photo, without requiring the know-how to do so. 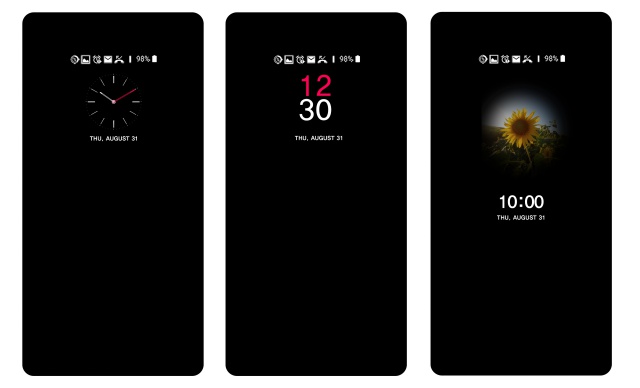 Moving onto the second screen, it appears much like it does on the G6, subtly bringing up notifications and phone information. The changes from LG will see a semi-transparent floating bar added to the mix, with quicker access to selected apps and controls, as well as the ability to now integrate a personal photograph.

Lastly, LG has confirmed facial recognition for the V30, with the front-facing camera capable of unlocking the device, doing so even when the phone's always-on display is present. Whether or not the system is fine tuned enough to recognise the difference between a glance at the screen and purposeful stare, remains to be seen. Along with facial recognition, users will be able to unlock their V30 via voice as well, thanks to Qualcomm's Aqstic technology.

With all these features already detailed by LG, hopefully they've saved something for the press conference on 31 August. We'll be covering the live stream, which starts at 09:00 (SAST), on @TechSmartMag, so be sure to follow.

Fitbit Versa
MultiChoice details how it is unfolding the future of entertainment with Microso...
Destiny partners with Red Bull for in-game content, may alienate fans
Smart Process Applications – the key to unlocking operational efficiencies
Fitbit Versa