With the weekend happening, you might have missed the new Rogue One Celebration Reel that hit the web late on Friday. Not listed as an official trailer, it rather takes us behind the scenes of Rogue One: A Star Wars Story, revealing some of the thoughts and feeling from the cast and crew (see below).

The reel coincided with London's Star Wars Celebration Europe 2016 event over the past weekend, where a number of interesting titbits were revealed, including the fact that Darth Vader will indeed star in Rogue One. He featured in a trailer that was screened for the audience only, keeping the rest of us in carbonite suspension. According to the The Independent, attendees were also shown more of Mads Mikkelsen's (Valhalla) Galen Erso and a new droid K-2SO, both not present in the Celebration Trailer below. There was also apparently a major spoiler, which you are welcome to if you click on the link.

Most insightful is director Gareth Edwards’ (Godzilla, Monsters) comments in the reel. “We’re making a film that’s right touching my favourite movie of all time [A New Hope]. But then if you’re too respectful of it, that you dare not do anything new or different - take a risk - then what are you bringing to the table?”

We are also shown a glimpse of what might just be this Rogue One scene stealing character – unofficially titled Space Monkey. You’ll see him cackling it up at 2:07 in the trailer, while he also made an appearance in a panel discussion at the Celebration Europe event, captured by this short video below.

Here's Space Monkey laughing and throwing a prop at host Warwick Davis. We like this guy 😄 #SWCE pic.twitter.com/HpvYVCKBx5

Apparently Rogue One will not have the usual yellow opening crawl intro that we’ve come to know and love, keeping in line with the movie’s status as a stand-alone title. The movie takes place shortly before events in A New Hope, telling the tale of how the Rebel Alliance actually got hold of the Death Star plans. It is not considered part of the official Star Wars saga, although it is certainly part of the official canon. The movie should hit the big screen come 16 December 2016.

Check the Celebration Reel below, while the full teaser poser is beneath. 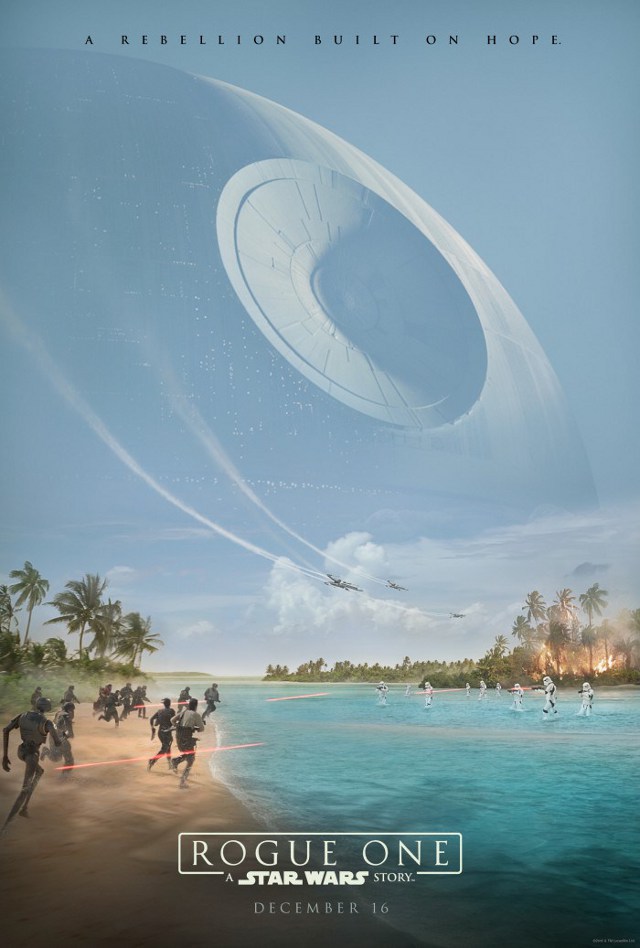