Oracle South Africa today announced the opening of an Innovation Hub in Woodmead, Johannesburg, a first for Oracle in Africa. The company believes this will help drive the adoption of emerging technologies across the country’s corporates, public sector and academia.

More specifically, Oracle’s Innovation Hub is aimed at furthering digital transformation in South Africa by raising awareness about the impact of emerging technologies such as the Internet of Things (IoT), Blockchain, Artificial Intelligence (AI), Bots and Machine Learning (ML) to help drive economic growth and support the delivery of innovative and transparent services to citizens and customers alike.

This Innovation Hub is based at the company’s Johannesburg office and will relocate to a new state-of-the-art Oracle building that is currently being built, expected to be ready in mid-2019. The new hub will act as a platform for Oracle customers, partners and other stakeholders to better understand the potential of emerging technologies and co-create industry specific innovations with top Oracle experts. 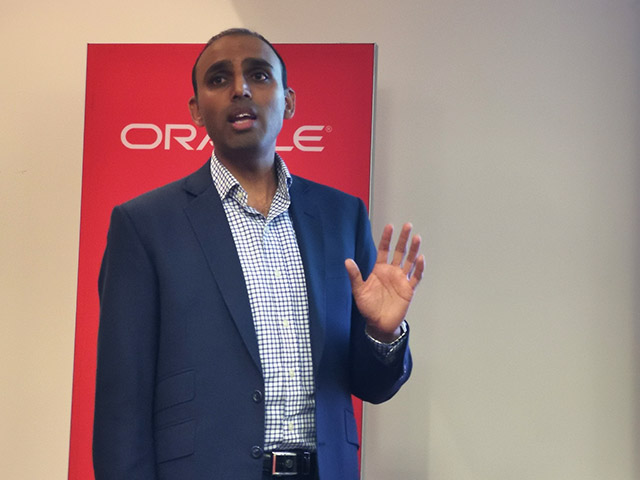 “There is now widespread recognition that a digital revolution is an imperative for South Africa’s socio economic growth; including by the Honourable President Cyril Ramaphosa”, said Niral Patel, managing director and technology leader for Oracle South Africa.

“As a leading cloud solutions company, we are focused on supporting South Africa’s public and private sector drive impactful transformation with latest digital technologies. Oracle’s new innovation hub in Johannesburg will act as a catalyst to help drive awareness, experimentation and implementation of transformational initiatives that will be customised to address local challenges and create new opportunities,” he added.

At the launch event, each of the emerging technologies were detailed and demonstrated, from the use of virtual reality to change the game for logistics, to AI infused chatbots which could recognise people’s emotional states and customize its responses accordingly.

Even more interesting though was how they would work synergistically together. One of the examples given was of how these emerging technologies would be brought together via the Sikhula app, which is aimed at streamlining the communications between a government and a country’s citizens. Oracle demonstrated how a new business owner/farmer could apply for a loan and connect with financial institutions to grow his busines. In the case of a farmer, the app offered the means to monitor the humidity on his farm via IoT sensors and be informed of weather conditions to take the appropriate action. As well, Sikhula provides a platform to connect with peers to address common farming concerns, while documents like passports or a drivers license could be securely stored digitally.

Furthermore, the same app would be able to respond to his pregnant wife being advised by her wearable to go to the hospital for the imminent delivery of her child. The couple would then be able to connect with eGovernment to register the birth of their child using an AI infused chatbot, with the necessary documentation being secured by blockchain technology. 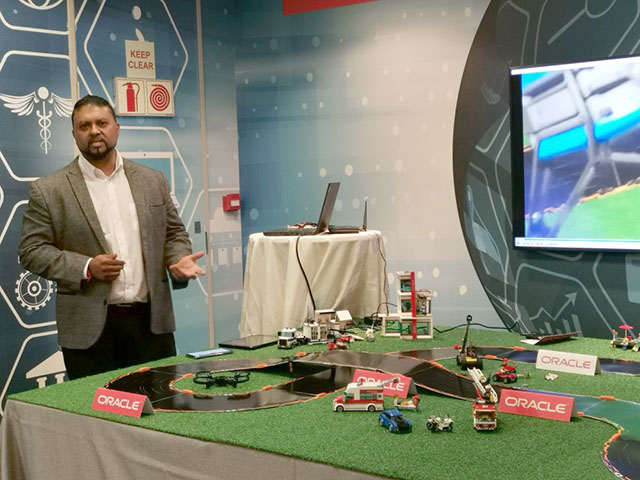 Nishen Naidoo, ERPM principle sales consultant ZA and SADC, demonstrates a simulated smart city environment and how a drone would convey  images of a car crash

Another example given was that of a smart city, with an unfortunate driver being involved in an accident. Along with paramedics being notified when and where a collision occurs, a drone would be dispatched to take photos of the scene for medical use and insurance purposes. As well, the patient’s medical requirements, any allergies and blood type would be automatically transmitted to the paramedics and hospital, with a blood type for a transfusion being automatically ordered as needed.

In both scenarios, Oracle demonstrated how seamlessly technology could make living in the world where these emerging technologies are commonplace. These scenarios, noted Derek Bose, senior applications director for South Africa and the SADC regional cluster at Oracle, are not for some distant future, but rather only a few years out at most.

But the use of AI, Blockchain, IoT and other hot topic technologies are not only about improving our lives, as if that wasn’t enough. There is also a very real business imperative to understand and adopt emerging technologies.

“However making Artificial Intelligence easy to adopt is critical - a key challenge for organisations is that they can’t afford to wait. The Oracle Innovation Hub will aim to address this challenge by engaging with key South African audiences by raising their awareness levels, helping drive an innovative approach and also supporting the skills development of next generation of African leaders,” he concluded.