Gone are the days when hybrid cars brought visions of slow and cumbersome vehicles; McLaren's hybrid-engine P1 is clear proof of that. Other car manufacturers have followed suit, with Volkswagen in particular showcasing a number of GTE-engined cars at recent motor events. Now it's the turn of French carmaker Peugeot, debuting their new 308 R Hybrid concept. Much like the P1, the 308 R Hybrid takes the best that electric and petrol have to offer, and deliver a combined 398 kW of power.

The 308 GTi carried a special place in the hearts of many hot hatch enthusiasts in the 80s and early 90s, but that impressive pedigree has waned of late. Could the 308 R Hybrid change all that? Well if the specs are anything to go by, then the Mercedes-Benz A45 AMG and BMW M135i could have something to worry about.

Peugeot has opted for a 1.6 litre four cylinder turbo, which is tuned to produce 201 kW. This is paired with two electric motors, to up the overall engine output to the aforementioned 398 kW. Each of the motors is linked to a specific element in Peugeot's new hot hatch, with one connected to the rear axle, and the other pulling duty on the six speed transmission. 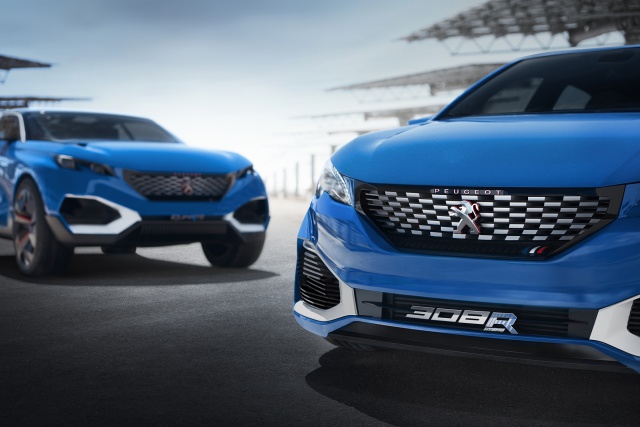 Can this hatchback move? You better believe it. Peugeot says 0-100 km/h is taken care of in only 4 seconds, and the 308 R Hybrid's top speed will be restrained to 250 km/h. Being a concept vehicle (and French), the 308 R Hybrid features a few distinct accessories. The first is notable from the outside, with a two-tone livery, as blue takes care of the front, and black the rear. Also unique is the dashboard material, which Peugeot describes as "digitally woven fabric", there also four individual racing seats, for driver and passengers.

For now this concept remains exactly that, but we're expecting a great response from the public for this beauty when it debuts in-person at Auto Shanghai later this month. Hopefully Peugeot will pull the trigger and start making a few. Till then enjoy the video below.