Last night, Samsung once again held its anticipated Unpacked event. The big change this year is that this wasn’t done at a swanky venue, packed with journos, influencers, celebrities  and industry insiders but virtually.

One thing that didn’t change is that the event, um, unpacked, a slew of anouncements for much anticipated devices, confirmed some of the inevitable leaks, and generally delivered on expectations.

Of course, leading the charge of new announcements is an even bigger Note – the Note 20 and Note 20 Ultra, with the latter pushing the phablet boundary to 6.9.” Clearly Samsung has recognized that those who love big smartphones aren’t shy of going bigger – even if it is only 0.1” more than the previous stellar Galaxy Note 10 Plus.

And that is in our mind wholly the right path for these devices, which are more like portable computers/sometimes notebook replacements/a smaller version of a Samsung TV at this point than smartphones.

The top of the range Note 20 Ultra boasts a faster screen refresh than its predecessors – at 120 mHz which should make the gamers in particular very happy, and the rest of us enjoy an even smoother experience.

The most noticeable hardware change is on the cameras as the Note 20 and Note 20 Ultra inheriting many of the camera tech introduced on the S20. For a quick glance at the most notable specs, take a look at the infographics below. 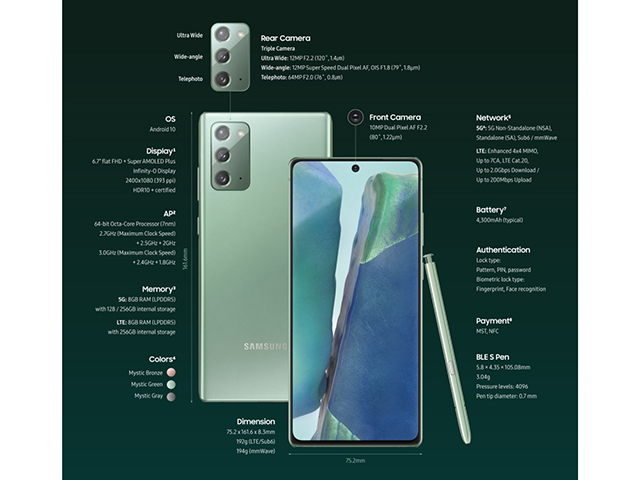 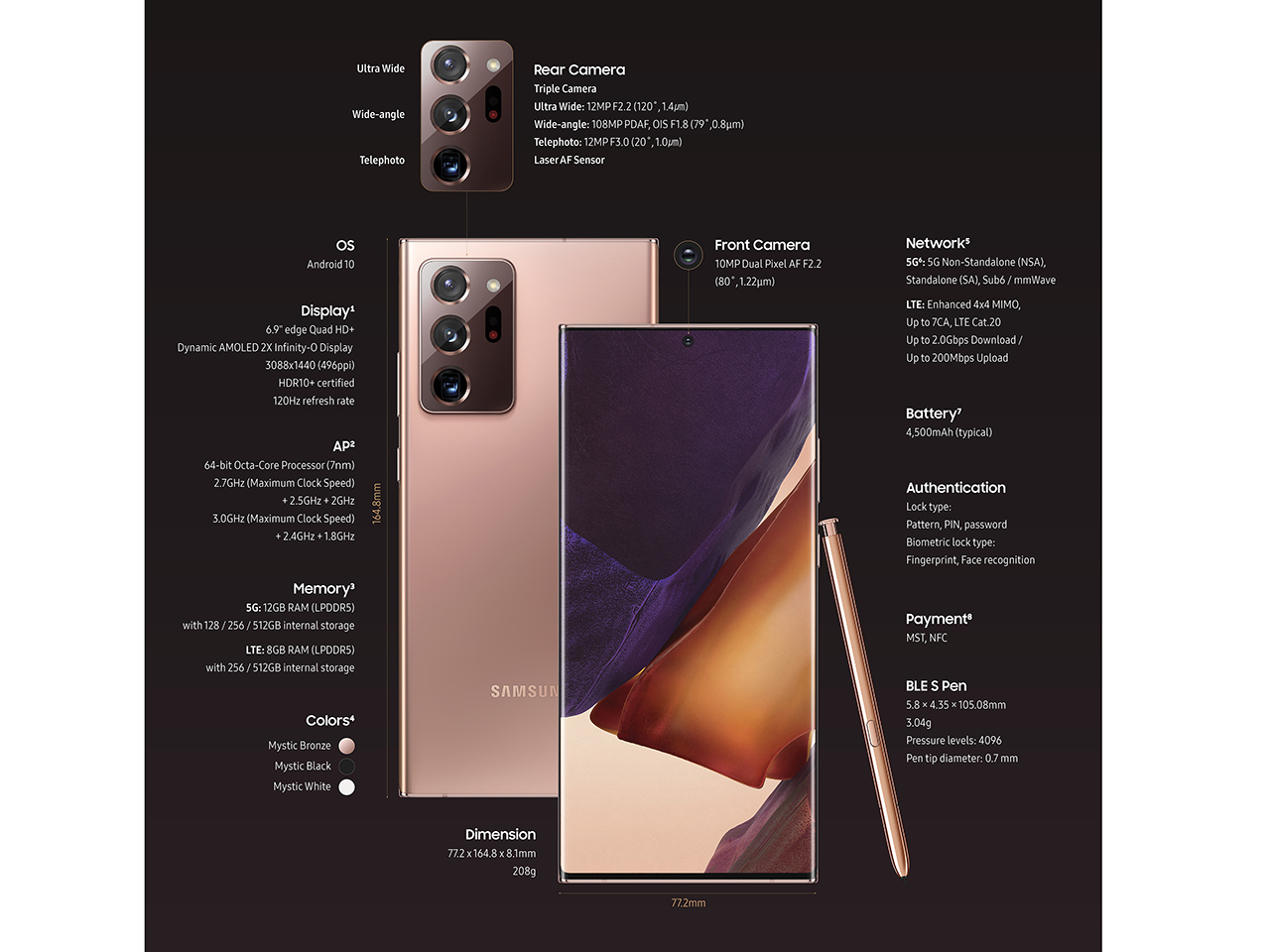 As well, we received a succinct answer from Samsung to the inevitable question: is the 3.5mm audio jack going to make a return? The answer is no, that ship has sailed. However, there are some new noise cancelling headphones that can fill that hole, with the most immediate of these being Samsung’s own Buds Live.

One of the new announcements that stood out to us is the enhancements Samsung has made to the Notes’ S-Pen. This is fitting, since that is the Note series’ main differentiating factor. According to Samsung, the S-Pen on the Note 20 series sports  improved latency for more natural, fluid writing. As well, the S Pen’s built-in remote controls have also received a major update.

The company promised that gesture control has been made easier with Anywhere actions – five new customizable gestures that expand on the capabilities offered by Air Actions. The new remote controls allow users to customize new actions for Back, Home, Recent App, Smart Select, and Screen Write, which, according to the company, will make navigating and presenting easier no matter which app you’re using.

Another new feature is Auto Straighten, which adjusts uneven or sideways writing on one’s notes to make them easier to read. Additionally, the Audio Bookmark feature allows users to sync handwritten notes with audio recordings, allowing users to record while jotting down questions and comments simultaneously.

Another killer feature, especially for those looking at the Note  20 as their productivity tool, is improved synching of notes across mobile, tablet and Windows PCs. This means that users will be able to access their Samsung Notes no matter what device you’re using, enabling users to pull up notes made on their smartphone on their notebook.

The productivity announcement that really stood out to us was the tighter integration between Samsung and Microsoft.

Samsung explained that with Microsoft’s Your Phone app and Link to Windows integration on select Samsung phones, users will be able to sync their Galaxy smartphone to their Windows10 PC to share messages, photos, notifications and calendar reminders in almost real-time. The Galaxy Note20 series introduces a suite of new experiences for a more continuous productivity flows.

For example, according to the company, users of the Note 20 series can expect “a seamless workflow across their phone, tablet, and Windows10 PC through your Samsung Account, which automatically syncs Samsung Notes to Microsoft 365 experiences, including Outlook and OneNote.”

From the presser: “Your notes appear in Outlook or OneNote as an image file, so you’ll always have notes for those impromptu conference calls. You can even get your Reminders across all platforms including Outlook, To Do, and Teams, to make sure you’re always on top of that to-do list. In addition to this, Link to Windows allows you to be more productive while using multiple devices.

Building on existing Link to Windows features that allow you to answer phone calls, respond to texts, receive notifications, and access your favorite mobile apps right on your PC, the Galaxy Note20 series delivers the ultimate multitasking experience.

The Your Phone Apps feature allows you to add your favorite mobile apps to your Windows10 PC Taskbar and Start menu to launch multiple apps from your phone with ease. The app now also allows you to copy and paste text and drag-and-drop files between your devices.”

That is going to be a boon for those productivity workers who don’t choose between a high end smartphone and a high end notebook, but rather routinely work with both.

One thing that Unpacked revealed is that, in sofar as the Note range is concerned, at this point Samsung doesn’t have to make big hardware overhauls of its Notes. Afterall, you don’t fix something that isn’t broken. Rather incremental improvements and bigger refinements on the hardware front, and concentrating instead on the major changes happening on a software and feature level were how the range appears to be going forward.

In terms of pricing, you may want to still your beating heart. This is what you can expect to pay locally for adding one of these to your pocket:

Samsung South Africa also confirmed that it will not be introducing the Note 20 Ultra (LTE) variant in SA, explaining that it believes that Note 20 customers “will want to make sure that their handset is capable of supporting the very latest in network bearer technology.” To see all the announcements for yourself, head down to the link below