Mobile threats are on the rise around the world, with recent research data collected by security vendors Kaspersky Lab showing that the number of malicious programs targeting mobile devices more than doubled between August 2009 and December 2010.

Last year alone saw a more than 65% increase in the number of mobile threats, resulting in over 1000 new variants being added to Kaspersky Lab's databases by the end of the year.

Kaspersky believes that a large factor in the rise of mobile malware is the increasing popularity of the Android OS, with criminals inevitably being drawn to the massive new market. Last year August saw the first malware detected on Android, and since then that number has risen to 15.

A large number of threats continued targeting the Java 2 Micro Edition (J2ME) platform which is present on a large number of mobile devices, which also means it's not only smartphones that are at risk, but traditional mobile phones as well.

“The use of SMS Trojans is still the easiest and most effective means by which malicious users can earn money. The reason is relatively simple: any mobile device, be it a smartphone or a basic mobile phone, has a direct connection to its owner's money via their mobile account. It is this 'direct connection' that cybercriminals actively exploit,” said Denis Maslennikov, a senior malware analyst at Kaspersky Lab.

Mobile threats have become more complex than ever before in the last year with the emergence of mobile bots and other remotely-controlled software. In addition, cybercriminals also used schemes such as redirecting mobile internet banking users to phishing sites and stealing user passwords.

Kaspersky Lab predicts that the number of mobile threats will continue to rise as the lucrative market continues attracting malware distributors. Therefore, take care of what you download onto your phone, what websites you visit and how you utilise sensitive passwords, because unfortunately even the mobile world has become a hotbed for malware. 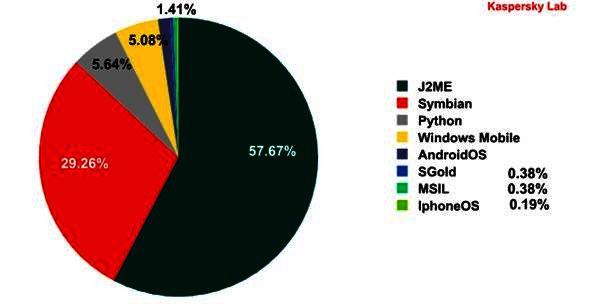