Following on from the recent launch of its Pen E-P3 flagship camera, Olympus has announced the launch of its new PEN Mini (E-PM1). The company asserts that the camera holds the distinction of being  the ‘world’s smallest and lightest system camera with interchangeable lenses,’ while offering full HD movies and stills.

To this end, the camera can accommodate twenty Micro Four Thirds, 27 Four Thirds and more than 500 other lenses (via an adapter). With dimensions of 109.5mm (W) x 63.7mm (H) x 34mm (D) and a weight of 254 g, the PEN mini is certainly small enough and light enough to merit being carried around for extended periods.

The company explained that the camera was designed for those who find photographing with high-end cameras awkward - asserting that most SLR cameras are heavy to carry and relatively difficult to use - while still desiring the advantages offered by interchangeable lenses. To this end, for novice photographers, the camera features pop-up descriptions in the main menu for various functions, while Live Guide enables users to adjust factors that are essential to final picture quality, including Colour Intensity, Lighting Mood, Brightness, Background Blur and Motion Blur, without knowing how these work. 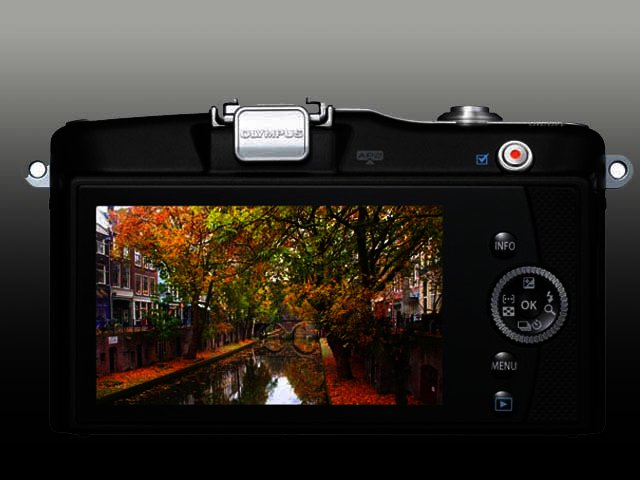 The PEN Mini has a 3" LCD screen
Feature Flurry
The 12.3 megapixel camera features up to ISO 12800 sensitivity, in-body Image Stabilisation, a 3” LCD and the company’s Frequency Acceleration Sensor Technology (FAST) autofocus (AF), that has 35 autofocus points, low-light AF Illuminator and out-of-picture AF Tracking. As seems set to become the norm amongst cameras, the PEN Mini also offers 3D still photos, along with 1/4000th second shutter speed with five frames per second sequential shooting, and accommodates SDXC cards.
Additionally, the Mini can record moving footage in the 1080i Full High Definition AVCHD format, which generates smaller files that are suitable for playing back on TV, along with 720p HD Motion JPEG video, which makes the files easier to edit on a PC. The E-PM1 further features Art Filters such as Pop Art, Soft Focus, Grainy Film, Pinhole, Diorama and Dramatic Tone, which gives shots a dynamic atmosphere by boosting the contrast. All six filters can be applied on-camera to both Full HD movies and still images.
While the main kit includes a M.ZUIKO DIGITAL 14-42mm (28-84mm) 1:3.5-5.6 II R lens and an external flash, the company stressed that the camera is compatible with a range of accessories and more than 500 lenses. The PEN Mini is available in black, white, silver, dark brown, purple and silver rose. An RRP or availability date was not available at present.
TechSmart has reviewed a previous PEN model, the E-PL1 here.
TAGS:
Olympuscompact camerasPEN MiniMicro Four Thirds
USER COMMENTS