Jaw-dropping action adventure we never wanted to end.
9.9    Gameplay
9.9    Story
9.9    Presentation
9.9    Lasting appeal
4.5
There are some games that we cannot wait to start playing, and others that we never want to stop. Uncharted 3: Drake’s Deception is quite easily both. The game sucked us in from the beginning, with a clever twist in the first hour that left us chuckling.
While it is not essential to have played the previous two titles, doing so certainly aids in the feeling of returning to the lives and exploits of treasure hunter Nathan Drake (Nate), his mentor Victor Sullivan (Sully) as well as Elena and Chloe who make a welcome return. Indeed, for those familiar with the Uncharted world, the third entry builds on and fleshes out the characters. Their complex relationships – one of the aspects that made the first and second titles so engaging – is given particular attention here, and feels even more like returning to old and familiar friends.
Nate and Sully’s friendship in particular is more fully explored this time around, alongside an engaging flashback to how the two first met. This highlights the game’s most notable strengths, namely of superb characterisation, excellent, believable voice acting and engrossing storytelling that continues throughout and that complements the title’s superlative graphics and sound.
Where did he go?
This time, Nate and Sully are following the footsteps of the great Francis Drake, who spent some unaccounted time on a mission for the Queen. However, they are not the only one’s following the famous explorer’s trail. They find themselves having to contend with a secret society led by the chillingly ruthless Katherine Marlowe, with sinister motives of its own, while searching for the fabled Atlantis of the Sands.
This leads players from one city to the next, uncovering secret pathways and hidden chambers, and into tantalizingly esoteric puzzles (there are more of them than in Uncharted 2). 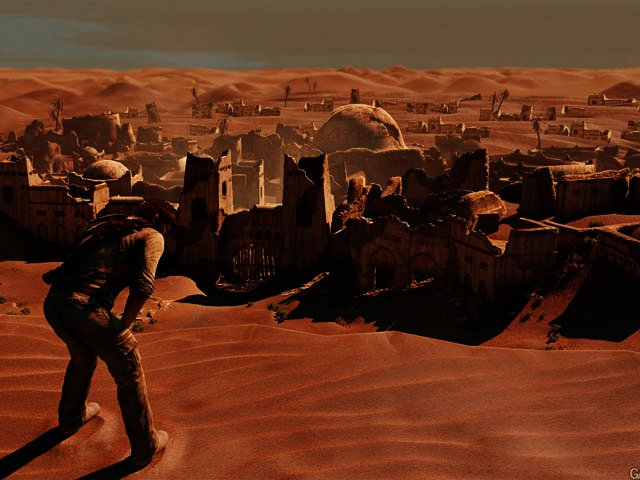 I knew I should've updated my GPS maps!
Hold onto your seat
Additionally, jaw dropping action sequences, which so thoroughly impressed in the previous games, are frequent and even more outlandish in this sequel, as you battle through Marlowe’s formidable forces.  Some standout moments include – but are not limited to – escaping a broken down French chateau while fire laps all around you; a luxury yacht that, in the interest of not spoiling anything, is decidedly less luxurious after Nate gets done with it; and a frantic fight aboard a cargo hold in an airplane that had us on the edge of our seat and shaking our head with a huge smile on our face.
For action fans, Nate makes any Bruce Willis or James Bond movie look tame in comparison, and offers up a beautifully well paced thrill-ride from one chapter to the next. However, it is his familiar wise-cracking sense of humour, instead of tired bravado, that make Nate that much more relatable, and had us laughing out loud at certain points in the game.
Choose your weapons carefully
Combat is mostly familiar to Uncharted 2 when it comes to wielding a variety of weapons; you can still only carry one small firearm (a 9 mm, MicroUzi, silenced pistol, 357 magnum for example) and one larger assault weapon (such as a shotgun,  AK47, Hammer and KAL 7 assault rifle), along with a few grenades.
There is a certain skill to knowing the right weapons to pick to deal with particular circumstances and enemies, as each weapon has its strengths and weaknesses. The shotgun is fantastic for close range and heavily armoured foes, but is able to hold less ammunition than the AK-47, for example. The MicroUzi (our personal favourite) is terrific as a one handed weapon, but is less accurate and more erratic than the 9 mm or .357 Magnum. And while the Dragon Sniper or grenade launching hammer is a boon when dealing with distant foes and groups of enemies respectively, you have to choose your shots very carefully, as ammunition is in short supply.
One of the main differences in Uncharted 3 is its hand to hand combat. This has been greatly improved, made easier to perform as well functioning as a far more viable way to take down your foes Jason Bourne style. This time, blocking at the right moment, escaping from bear hugs and debilitating grips, and striking an enemy unconscious, is fluid and feels like a genuine fight for your life rather than a last resort because you have run out of ammo. 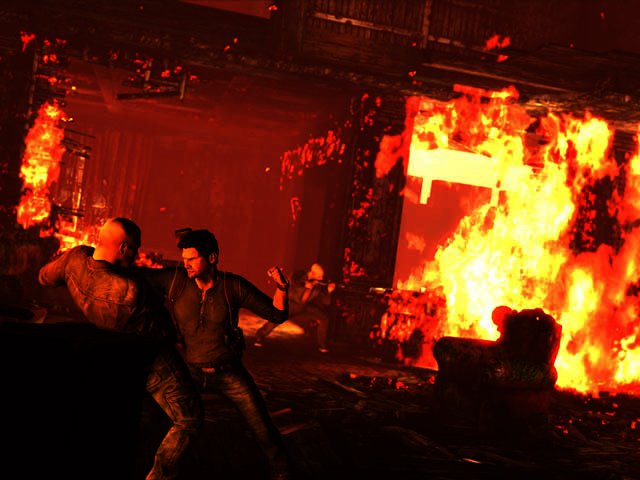 Now this is how you have a heated fight.
Hide and seek
The platforming is as fluid as we expected it to be, with Nate climbing and jumping his way around the superbly designed levels. Inexplicably there are some areas that you just can’t reach even though it looks like you should be able to, which leaves you jumping against a wall, for example, and falling back to the ground. This, though, is the game’s way of telling you you’re headed in the wrong direction. Additionally, it does offer up the occasional - but unobtrusive – hint if you get truly stuck.
One important part of the game is that you are not invulnerable. As you get hit, a red glow shows where the attack is coming from, and the environment becomes progressively monochrome to let you know when you’re close to death. Take too many such hits and it’s game over, returning you to one of the game’s generous checkpoints.
Popping behind cover is therefore critical; firstly it enables you to recover your health, (the colour returns to your surroundings to let you know when you’ve fully recovered) and secondly it shields you, giving you the opportunity to break cover, aim and dispatch foes who frequently outnumber you, from relative safety.
Additionally, treasures are spread throughout the many levels; adding greater incentive to explore the game’s detailed environments rather than solely proceeding in a linear fashion.
Gunning for you
Joining a thrilling campaign is equally superlative co-op and multiplayer modes, such as team deathmatch, plunder (where you have to bring an idol back to your base), team objective (best of five rounds to complete an objective before the opposing team) and free for all (every player for him or herself).
The multiplayer makes for a far faster pace than in the single player campaign; and kept us coming back for ‘just one more respawn’ to exact revenge on the player who caught us unaware. At the start of the game, you can customize your avatar and choose a variety of weapon load outs to equip on the fly, as well as vote for the map you would like to play on.
As you earn experience points and increase your rank, more weapons and other characters are unlocked, including Elena, Chloe and Sully. Additionally, more character skins can be purchased in the PlayStation Store for R5.
Co-op arena and Co-op adventures (story based mission where you team up with one or two friends) are also included, and make for a no less thrilling and immersive experience. These can either be played online or in split-screen. For the most part, joining online matches went without a hitch, although we did experience some lag on occasion. 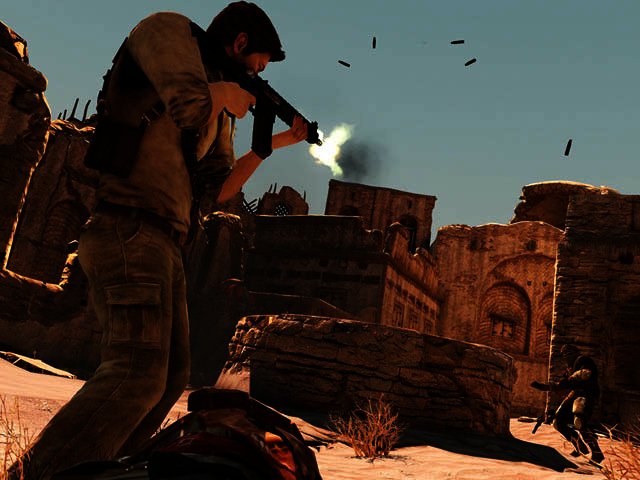 I told you that you would regret kicking sand in my face.
To the point
Uncharted 3 offers a stellar action gaming experience that builds on everything Uncharted 2 offered, refines it even more and proves to be, quite simply, a masterpiece in the current generation of console games.
The further we progressed in Uncharted 3, the more we have been singing its praises. As a game, it is greater than the sum of its parts, combining awesome acting and storytelling (again) with thrilling action and nail-biting combat sequences.
We would go as far as to say if there is only one PS3 game that you buy this holiday season, make it Uncharted 3 - we cannot recommend it highly enough.
Pros
Super characterisation, storytelling and voice acting
Engaging combat
Thrilling action sequences
Cons
At some point, it ends