Compared to its big brother, the Alienware M17X, the M11X is a tiny beast, with dimensions almost resembling that of a netbook. But that's exactly the aim of the M11X, to prove that you can deliver the performance you'd expect from 15” or 17” models in a compact body. The question is, does it succeed? 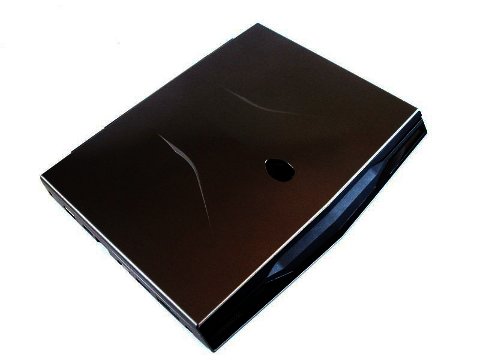 Being the most portable computer in the current range, the M11X is the perfect choice for attending LAN parties. Measuring in at 286 x 33 x 233 mm and weighing only 2 kg (the M17X weighs 5.7 kg), the notebook is easy to carry around and can fit into any kind of notebook bag with room to spare.

Like its extraterrestrial counterparts, the M11X sports the instantly recognisable, aggressive styling which the Alienware brand has become known for. While it may not appeal to everyone, the angular lines, Alienware logos and myriad of colourful LED lights definitely imparts it with the looks of a frame busting gaming machine.

As with the other devices in the range, the M11X's LEDs are highly customisable thanks to the bundled Alienware Command Centre software, allowing users to set different lighting options for the power button, keyboard, front corners of the chassis and even the status lights above the keyboard. If you aren't a fan of rainbows and flashing lights though, you can always just set the entire LED configuration to a uniform colour.

Alienware has fitted the M11X with a fairly comfortable keyboard, the keys all feel very solid and are highly responsive to touch, making for a very accurate typing experience.

The tight dimensions of the notebook prohibits it from sporting a numpad, although a handful of media keys have been integrated alongside the function keys.

The touchpad was fairly responsive and features separated left and right buttons. The one complaint we have about the touchpad is that it's situated in a very awkward position when typing, resulting in the mouse cursor jumping around the page as you accidentally brush your palm against it. Therefore we'd recommend turning off the touchpad entirely if you're using an external mouse (which as a gamer, you probably will). 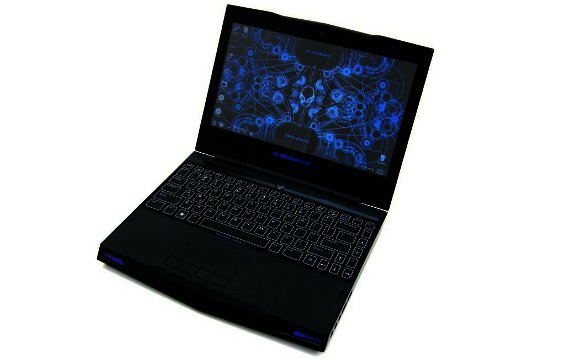 Let's get into the most important aspect of a gaming machine, its specs. While the M11X may not have quite the polygon moving muscle of its larger counterparts, it's still quite a powerful machine. Our test model was equipped with an Intel Core i5 U520 CPU clocked at 1.07 GHz, 2 GB of DDR3 RAM and two graphics options, a discreet Intel GMA 4500MHD integrated card, and a Nvidia GeForce 335M to take care of gaming business.

During benchmarking the notebook performed well, earning a score of 6597 on 3DMark06. Compare this to the 3420 of the Core i7 Asus U43J and it's clear that the M11X is no slouch. We would've like to see more memory on the device, but newer models are coming out with 4 GB configurations, so this may not be a problem anymore.

The right side of the device features a mic jack, two headphone jacks and two USB 2.0 ports. On the left you'll find another USB 2.0 port as well as an HDMI, DisplayPort, Ethernet port, 4-pin Firewire port, memory card reader and SIM card slot.

The 11.6” TFT LCD display sports a native resolution of 1366 x 768 and colours on the screen was bright and crisp. Our test version came with a 64-bit version of Windows 7 Home Premium and a 1.3 megapixel webcam is also present.

In true netbook fashion the M11X doesn’t contain an optical drive though, something which may hinder certain users. This means you’ll have to download game files from the internet or copy them from another PC, so keep this in mind. 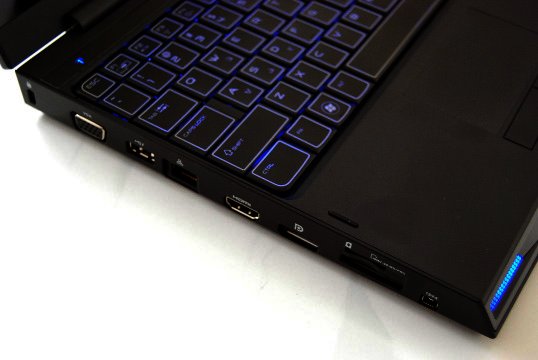 Alienware claims the M11X can deliver up to 8.5 hours of battery life as long as you stick to the integrated GPU. During testing the battery ran out just after reaching the 7 hour mark, with some basic word editors open and some browsing done - a very good battery life compared against a lot of the other machines we tested.

When playing games though this figure is going to fall drastically, by how much depends on how resource intensive the game is. The M11X does not throttle CPU/GPU power when unplugged, so all cylinders will be firing once you start gaming. During testing we found the battery ran out after 2 hours and 30 minutes of playing Portal, meaning that during unplugged gaming you can expect the average to lie around the 2 hour mark.

The M11X is a very impressive machine, one of the first true compact gaming notebooks, able to play the latest games even though it sports the dimensions of an ultraportable. If you're a gamer wanting a compact LAN solution, then the M11X is almost perfect. The device is starting to show its age a little though, so we'd recommend checking the specs before picking one up. The M11X retails for a recommended R14 999.