"The son of Krypton versus the bat of Gotham." Those words are uttered by Jesse Eisenberg's (The Social Network) Lex Luthor midway through the latest trailer for Batman v Superman: Dawn of Justice. Up until now, many in the geek fraternity thought that this new DC mashup film would pit its two greatest heroes against one another, and although it seems that battle does indeed take place, the true fight is in fact with Doomsday. For a long time, it was pondered what exactly would bring these two heroes together. As it turns out, it's the one individual capable of killing Superman, in the comic books at least. 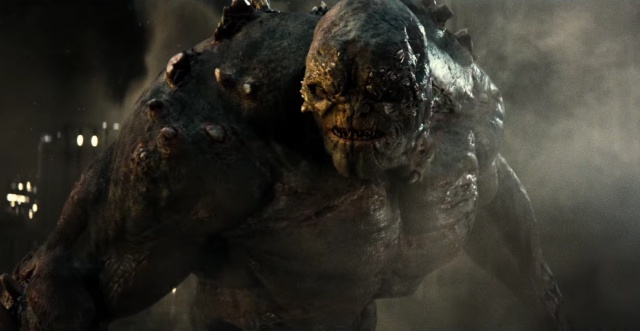 Joined by Wonder Woman (Gal Gadot, Fast and Furious 6), the three heroes take on this monstrosity created by Lex Luthor, who potentially harvests the DNA of Zod. Personally, we would of liked it if Warner Bros. kept the cat in the bag up until the film debuts on 23 March 2016. Nevertheless, we're sure director Zack Snyder (Man of Steel, Watchmen) will amp up the action and perhaps give us a glimpse of Aquaman and The Flash, played by Jason Mamoa (Game of Thrones) and Ezra Miller (Perks of Being a Wallflower) respectively.

Click on the trailer below and let us know what you think of Doomsday.