When a smartphone company unveils their latest flagship device, there is often a large amount of fanfare surrounding the announcement. HTC's latest unveiling, however, had no such fanfare, despite the Taiwanese manufacturer counting the days before the big reveal.

Instead, the company's president for smartphone and connected devices business, Chialin Chang, appeared in a video detailing why he was so excited about the HTC 10. Whether or not debuting the device under such circumstances proves a good move remains to be seen. Nevertheless, Andorid users have yet another flagship smartphone to consider, so let's run through what the HTC 10 is all about.

In terms of design, HTC has not veered too far from its usual aluminium unibody shape. In fact, the HTC 10 looks more reminiscent of the HTC One (review) than the HTC One M9's (review) successor. The only noticeable change sees the introduction of chamfered edges on the frame and back of the device. The ones on the rear are particularly large, likely resulting in a better feel in the hand of the 5.2" smartphone.

Speaking of which, the display is Quad HD in nature, offering up a 2560x1440 resolution and 564 ppi pixel density. As such, it places the HTC 10's screen quality on par with the Galaxy S7 and LG G5, although it's important to mention that the HTC 10 does have a lower ppi.

In terms of internal specifications, HTC has taken a page out of LG's smartphone playbook. To that end, the HTC 10 sports a quad-core Qualcomm Snapdragon 820 chipset, which clocks up to 2.2 GHz, according to the Taiwanese company. Added to this is 4 GB of RAM, with a choice of either 32 GB or 64 GB onboard storage models. Should either of those options prove insufficient, there is an extended microSD slot good for up to 2 TB. 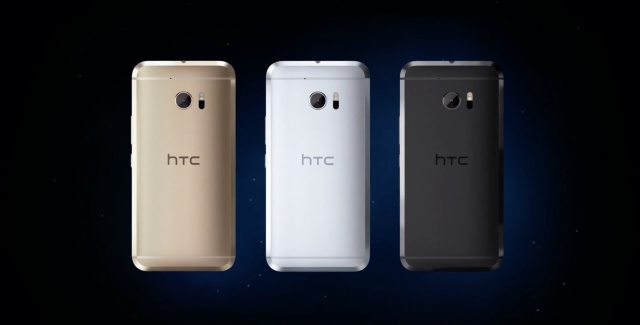 As we look over the rest of the HTC 10, it is the camera setup that has received quite a bit of attention from its manufacturer. Consequently, it touts a 12 MP shooter on the rear, with optical image stabilisation and a ƒ/1.8 aperture, as well as 26 mm focal length. The front facing option serves up 5 MP, with the same aperture as its rear brethren and a 23 mm focal length.

The front facing camera is perhaps the standout of the two, as HTC wants it to be the go-to option for the selfie-obsessed user. Thus, it has smart technology which senses smiles in order to capture an image, along with voice-activated selfie control.

On the bottom and top of the HTC 10 we find Boomsound speakers, both of which have been given the hi-res treatment. As such, both are hi-res audio certified, with the added ability of working with hi-res earphones.

The HTC 10 might not be the showstopper we were hoping for, but all in all it looks a very tidy smartphone based on the specs and design. If HTC can get the pricing right, especially with the slew of new Android smartphones priced in and around the R12K to R15K mark, the HTC 10 could turn out to be a solid alternative. It's currently up for pre-order in the US at $700 for the 32 GB model.

HTC has not given a definitive release date for this device, but states that in will arrive in select regions in early May. For now, it is unknown if South Africa will be one of the select regions, but more information will likely be forthcoming.