"Squeeze for the Brilliant U." At the time, when HTC's invites for a livestream went out a couple of weeks ago, many were in the dark as to what the Taiwanese company was alluding to. After hosting a livestream event in Taiwan earlier today, things are a bit clearer, with the company unveiling its new HTC U11 flagship phone.

The Squeezable portion refers to the Edge Sense feature touted by the new device, which allows users to configure different types of pressure sensitive squeezes to launch specific apps and services. A long squeeze of the frame of the phone for example, could open the camera app, or perhaps toggle the Google voice search.

Precisely how consumers will react to this experience is unclear, especially for us in South Africa, with HTC being all but non-existent when it comes to mobile in the past 18 months. Nevertheless, there are some noteworthy specs on the HTC U11, not to mention a rather sleek and glossy back cover which should pique some interest. 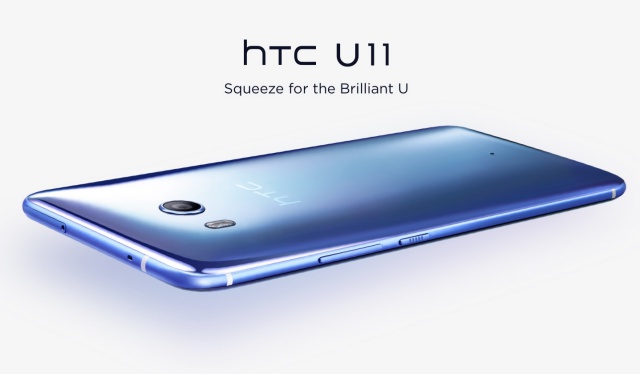 Other elements see a 5.5" QHD display up front, with an octa-core Qualcomm Snapdragon 835 chipset internally and 4 GB RAM with 64 GB onboard storage for the starter model. Things can get bumped up to 6 GB RAM if you go for the 128 GB model, and there's still a microSD slot good for an extra 2 TB, which should stand you in good stead.

Moving to the back, a 12 MP camera with dual-pixel autofocus is on offer, but it's unclear if it features some post-capture editing tricks that some of HTC's One devices supported. There's also a 3000 mAh battery, IP67 water-resistance and dust-proofness, but no headphone jack, which is instead replaced by a USB-Type C port (3.5 mm headphone jack adapter cable is on offer though).

The HTC U11 will hit retailers in the States in June, carrying an estimated $650 (R8 500) price tag. Whether we'll ever see one land locally in any official capacity, is unclear for now.