While IFA 2017 in Berlin opens its doors to the general public this Friday, 1 September, for media and industry insiders it begins in earnest today. To that end, all of the top manufacturers will be vying to make the biggest impact with their respective announcements, and generate plenty of buzz about the latest devices they unveil.

With so much expected to be revealed, we've compiled a handy preview to keep you in the loop as to which company will be debuting what.

A regular fixture at recent IFA conferences, Acer kicks off their efforts today (30 August) at 10:30 (SAST), with the Predator gaming range likely to be the main focus. If the company's online teaser video is anything to go by, cooling technology will be a trend, with new notebooks and desktop offerings to the Predator range expected. Hopefully though, accessories also get a shout out, and we finally get more news on the StarVR headset front, or perhaps a massively overpowered piece of hardware like the Predator 21 X.

Much like Acer, Asus is expected to focus its efforts mainly of the gaming hardware side, with the company often reserving its mobile products for Computex earlier in the year. To that end, the Asus ROG (Republic of Gaming) lineup could see several key refreshes, with an insane looking notebook, like the GX800, not out of the question either. The Asus press conference also kicks off today at 13:00 (SAST) with the company promising to reveal the #EdgeofBeyond.

With TCL now at the helm manufacturing their devices under the BlackBerry Mobile banner, IFA 2017 does not promise anything new from the company, at least according to recent reports. As such, we likely won't see a successor to the KEYone, which has garnered mixed reactions to date. In fact, the KEYone may very well be the device BlackBerry Mobile is bringing to Berlin, with one difference being a new coat of paint. To that end, the all-black version of the KEYone may get an official worldwide release. BlackBerry Mobile will make its big reveal for IFA on 31 August, but no time has been mentioned.

One of the biggest announcements for IFA 2017 will be made by LG, and the highly anticipated V30 smartphone. The South Korean manufacturer has been drip feeding us bits of information about the new phone, and the way things are shaping up, it could prove more impressive than their current flagship, the G6. LG will be unveiling the V30 at 09:00 (SAST) on 31 August, after which we'll see if Samsung and the Note 8 have anything worth worrying about.

While Microsoft normally uses standalone events to showcase their latest wares, IFA 2017 will afford the brand the opportunity to detail its VR plans. More specifically, with the help of their original equipment manufacturers (OEMs), debut a bunch of VR headsets designed to work with Windows 10.

We'll also get to see the company's new VR controllers in action, and hopefully get some news on if the VR hardware will be making its way to South African shores. No precise press conference is in the offing, but expect announcements from OEMs regularly out of Berlin.

What does Motorola have in store? If recent leaks are anything to go by, the Lenovo-owned company will debut their X4 smartphone. While an official specs sheet has not been released yet, it's expected to appeal heavily to the mid-range market, with a 5.2" curved screen, dual rear cameras and Snapdragon 630 chipset internally. Whether or not all the rumours are true, will be confirmed at 20:00 (SAST) on 31 August, when Lenovo holds its IFA 2017 press conference.

With the Note 8 now out in the open, it's time for Samsung to focus on its wearables. As in previous years, IFA 2017 will see the South Korean company reveal a successor to the Gear Fit 2, believed to be called the Gear Fit 2 Pro. The big difference in this iteration is rumoured to be the addition of more activities it's able to track, including swimming.

Samsung is also expected to unveil a new Gear Sport smartwatch, as they move away from the chronograph looks, to something more fitness-focused. Things get underway tomorrow at 19:00 (SAST) for the Samsung press conference in Berlin.

Another mainstay of the Berlin-based tech showcase, Sony will be at it once again with a pair of devices anticipated for its Xperia lineup. To that end, the company is expected to announce the Xperia XZ1 and Xperia XZ1 Compact.

Although official images are still forthcoming, both devices are said to look like the XZ Premium in smaller bodies. They're also rumoured to have Snapdragon 835 CPUs and 19 MP cameras. Hopefully though, Sony has integrated a few more intriguing elements. The action gets underway for Sony at 14:00 (SAST) on 31 August. 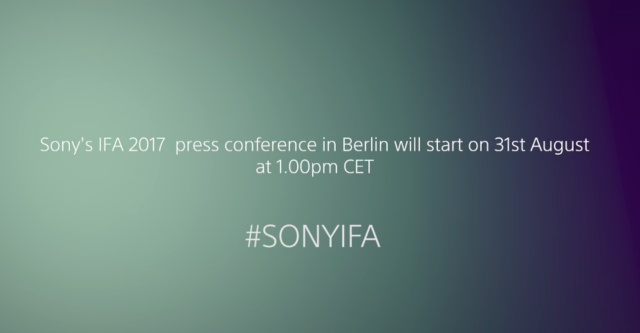