For many photographers starting out on the DSLR route, chances are the Sigma 70-300mm has been part of their arsenal. Known to produce more affordable alternatives to lenses coming from the incumbents – Canon and Nikon –  Japanese company Sigma has undergone a revival under its new president Kazuto Yamaki. TechSmart was lucky enough to meet with him at the recent Photo & Film Expo, held at the Ticketpro Dome, Randburg.

In 2012 the decision was made to group new lenses in the Sigma range into one of three categories – Art, Sport and Contemporary. The drive, initiated by the Kazuto Yamaki, reinvigorated the company, since introducing highly acclaimed lenses such as the 35mm f1.4, the 50mm f1.4, and more recently the world’s first 20mm f1.4 lens, into the market.

When listening to Yamaki, it seems as if the new categorisation was born out of frustration. Before becoming president, he was managing certain engineering divisions at the company, realising that to produce lenses entails balancing trade-offs. A high quality optic might have to sacrifice weight and will be expensive; a lighter lens might come at the expense of image quality.

This lead to the creation of the Art, Sport and Contemporary ranges. Each range serves a specific segment of the market looking for something different from a lens, although Yamaki is quick to point out that the name of the category should not define for which purpose the lens must be used for. Lenses in the Contemporary range tries to provide the best image quality at a reasonable price, while image quality is the main priority of the Art lenses. SA wildlife photographers can look at the Sport range for those long zoom ranges needed for a stint in the Kruger. 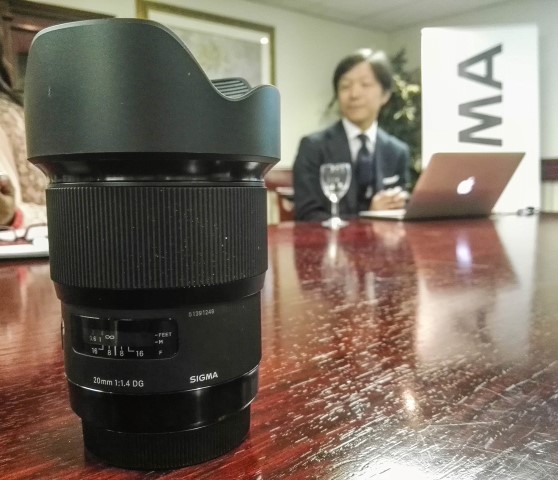 For Sigma the emphasis now seems to have shifted away from trying to get a Sigma lens into every camera bag; instead the company is putting a priority on producing higher end lenses. Yamaki confirms as much: "High end products have higher priority." But when asked about the company's support for entry-level customers, he points out, “I don’t think we can provide super cheap products because we produce everything in Japan, but we always try to develop products that will satisfy entry level customers. They have been Sigma customers for a long time.”

The past few years have seen the rise of full frame cameras, now available at prices more suitable for prosumers and not just the pros. It's in this bigger sensor size that Yamaki foresees the most growth, rather than the smaller APS-C size. He is not convinced that full frame is better in all respects, citing faster readout speed of APS-C sensors which is good for video recording and frame rates in live view. In many respects the company’s customers have already made the jump to the larger sensor. “Our customers are photo enthusiasts, and many of our customers now use full frame cameras,” he said.

A look to the mirror(less)

For DSLRs there is a threat on the horizon - the rise of mirrorless cameras. While mirrorless has not found much support in South Africa yet, the Asian markets have taken to these smaller, more portable devices, and Yamaki sees this a definite growth market for Sigma. He does not, however, believe the compact size of the cameras are the biggest drawcard, but rather that they offer certain other technical benefits. “Focus accuracy is the biggest advantage of mirrorless cameras. The electronic viewfinder also gives very good feedback to customers,” he notes. Yamaki does not mince his words though about where photography is heading. “In the future I think the majority of cameras will become mirrorless,” he states.

With the mirrorless market still pretty much anyone’s game, especially with Nikon and Canon testing the waters but not firmly committing, whom then to support when it comes to mount? According to Yamaki, adopting a new mount is an extensive undertaking, involving reverse engineering of the focusing systems and continued support. In this regard Yamaki believes it will be up to looking at marketshare to make the call. “If we see the opportunity and the customer demand is high, we will add the mount,” he notes.

With all the talk about lenses, it’s easy to forget that Sigma also produce its own range of cameras. Will manufacturing Sigma cameras still be a priority going forward, especially now with Sigma upping its lens game? Without mentioning a specific model or time frame (camera manufacturers rarely do), Yamaki did say that Sigma is working on new cameras, with an announcement coming sometime in the future. “With cameras we are not really successful to be honest,” he said, mentioning that the company’s biggest market is its native Japan, with once again photo enthusiasts being Sigma’s main supporters.

Yamaki believes that the community which bought Sigma cameras is vocal about it, and even though they also own other cameras. Sigma’s unique sensor is the big drawcard, with Yamaki comparing its image quality in good light to that of medium format cameras.

All about the glass

There comes a time in many a photographer’s life when they recognise it’s perhaps not as much about the camera body as they might have initially thought. Yamaki confirms as much when he talks about how photographers are realising that, “changing lenses change their photography a lot.” Seeing the unassuming Yamaki next to his lens range at the Sigma stand at the Photo & Expo, he comes across as quietly proud. With the accolades received by some of Sigma’s new lenses, one would think that he realised long ago that it was all about the glass.

Click below for a video about Sigma's lens factory located in the hinterland of Aizu, Japan.