An action packed tease of something terrific
9.0    Gameplay
8.0    Story
9.0    Presentation
6.0    Lasting appeal
4
When it was first announced that Ninja Theory would be heading the rebooting of Devil May Cry, there were some rumblings and concerns of whether the studio would do the franchise justice. If the new demo of the game is anything to go, those worries can be firmly and finally laid to rest.
Ninja Theory (the same studio behind the sadly forgotten Heavenly Sword and the underrated but enjoyable Enslaved: Odyssey to the West) clearly know what they are doing, because the demo (which we downloaded as it became available) looks strikingly stylised, and, more importantly, is a blast to play.
Dante has been given the right amount of self-assured swagger and brashness, as would befit a nephilim (the offspring of a demon father and angel mother) armed to the hilt, without coming across as being annoyingly arrogant or overly petulant.
The world itself looks, well, beautiful might not be the right word, but certainly distinctive and enticing. On the PS3, the graphic details looked great, nor did we notice any substantial issues, framerate drops or tearing in the heat of battle. 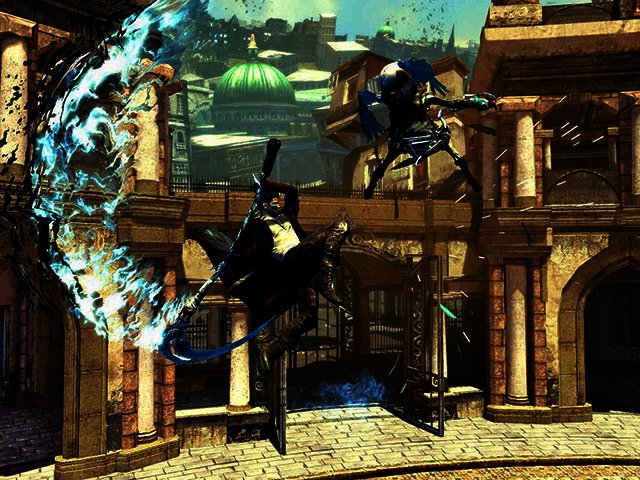 And another way to claim numerous air miles is to do this a hundred times an hour.
Spilt milk (and blood)
The story (or at least what we see of it in the demo) revolves around a brief reunion with his twin, Vergil, and a plan to avenge his mother’s death and father’s capture by a particularly strong demon. While Vergil is only given a cameo appearance here, he will apparently have his time in the sun via DLC that will be made available for the full game.
It’s a good thing too, since we suspect that sibling rivalry amongst nephilim doesn’t involve anything as mild as pushing each other down flights of stairs or lacing the other’s cooldrink with laxative.
Control yourself!
Control wise, Ninja Theory’s fingerprints are all over the title, and reminiscent of the complexity of attacks on offer in Heavenly Sword. Every trigger, every button has a purpose, and plays its role in accessing a variety of attacks.
Additionally, combining presses accesses other gear on hand. For example, while Dante has several melee weapons to choose from, including his swords and a scythe, along with his guns (which can be remapped to the button of your choice) Dante can also deploy a whip to pull enemies in close or latch onto and swing to distant platforms. Another combo initiates a razor edged spinning attack, useful for when a bunch of enemies get a little too close for comfort.
On the plus side, this means that there are a myriad of ways to deal damage; on the minus side, it’s quite easy to forget which combination of button presses accesses which item or special move. Nonetheless, we found this becoming a bit more familiar as we played for a while, so we are not really concerned this will be a hindrance to the game. 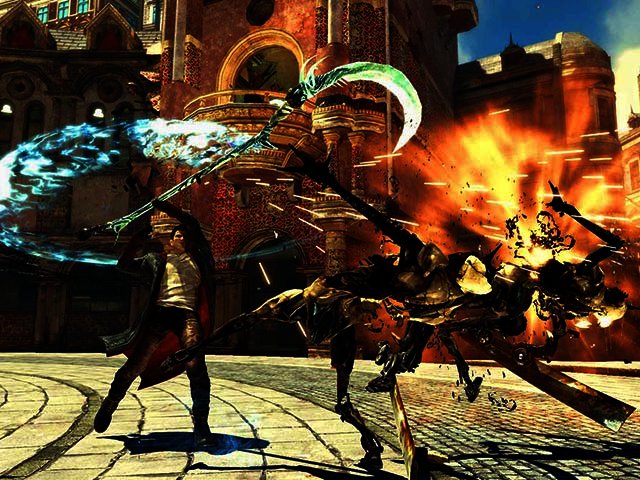 Just whatever you do, don't ask him about his drycleaning bill - it's a sensitive subject.
Level playing field
The demo provides two levels to battle through – Under Watch, which is an open area level that introduces one to the game with some enemies – and Secret Ingredient, which gives players to opportunity to face off against one of the game’s bosses.
While the demo only gives a small taste, it looks like there will be plenty reasons to explore the world, with different keys and secret doors to find, lost souls to rescue and health cross fragments and devil trigger cross fragments to build up to increase Dante’s health and devil (magic) abilities respectively.
Without spoiling too much, Under Watch gives a great indication of the title’s artistic direction, and gave new meaning to the phrase ‘the walls are closing in’. Additionally, for all the right reasons it reminded us more than a little of Bayonetta.
Secret Ingredient, meanwhile, does not apparently refer to anything you would find in a Master Chef kitchen (or kitchen of any kind, we hope), and instead, brought back fond memories of the first Darksiders game and The Fly, where you have to take out a particularly disgusting boss for reasons that weren’t explained.
While the demo is fairly brief, it does give players access to four of the game’s difficulty settings, including Human, Devil Hunter, Nephilim and (locked on first play), Son of Sparda.
To the point
We make no secret of the fact we love action-adventure games, particularly when they are stylishly realised, and judging by the demo, Devil May Cry certainly left us wanting more – a lot more. It’s a demo well worth playing, and, if you are looking forward to this title’s release in six weeks time, a good way to whet one’s appetite.
Chances are, if you like Bayonetta and Darksiders, or have fond memories of the previous Devil May Cry games, this is one to give more than a passing glance.
Pros
Alluring world
Myriad of attack options
Fun combat
Cons