Within the vast arcade fighting game universe, two franchises tower head and shoulders above the rest of the competition, after having obtained black belts in sales and rabid fan-boy support.

On offer is an epic roster of 43 characters to somersault into the ring, 38 of which are available from the start. These fighters possess a cartoonified look, much in the same vein as those of WWE All Stars, but just not as over the top. They range from Street Fighter stalwarts Karate maestro Ryu, quick-footed Chun Li and the real “rooi gevaar” Zangief, through to Tekken regulars like Tae Kwon Do master Hwoarang and the King of Iron Fist himself, Heihachi Mishima.

The cartoonish design may put off certain Tekken fans, but we found the character and fighting arena designs to look superb. As with the Virtua Fighter range, stages often feature a dual location outlay, meaning after round one the fighters jump to the next area within the stage. Unlike within Virtua Fighter though, we weren’t able to knock our opponent into the next area within a round. 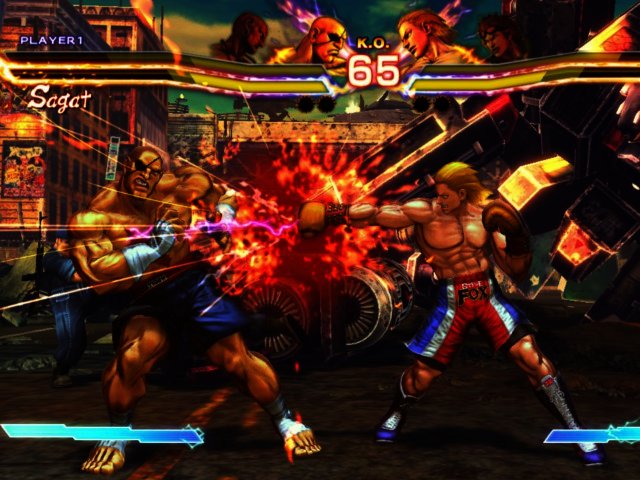 Float like a butterfly, sting like a bee. His hands can't hit what his one good eye can't see.

Wax on, wax off Daniel-san

As in real life, gamers must train to hone their skills if they are to win their bouts. Although SFxT does sport a run-of-the-mill training mode, whereby you can learn to perform moves and combos on a dummy opponent, the game’s challenge mode is where you’ll learn to dominate bouts.

Challenge mode comprises of three sub-modes, namely Tutorial, Mission and Trial, which all combine to school players on how to be the best fighter they can be. Like its name suggests, Tutorial will enables one to learn how to perform moves, combos, blocks and special moves, schooling gamers on not only how to perform these but also when best to employ each different technique.

Within the 20 Trial challenges, players face a dummy opponent but are challenged to practice fighting in a certain way; for instance left-right-combinations only or exclusively relying on and honing fighters’ special moves.

Lastly, there are 20 Mission challenges that have gamers facing a CPU-controlled opponent who they must defeat within a limited time. Besides having to keep one eye on the clock, you are also locked into a certain way of fighting, for example, defeating the opponent by using counter moves only, meaning players cannot initiate an attack.

Gamers who master the Challenge mode will be right on their way to being able to flawlessly perform jaw-dropping (and fight ending) combinations, such as switching between two fighters during a combo, and thereafter transition into a Super Art move. 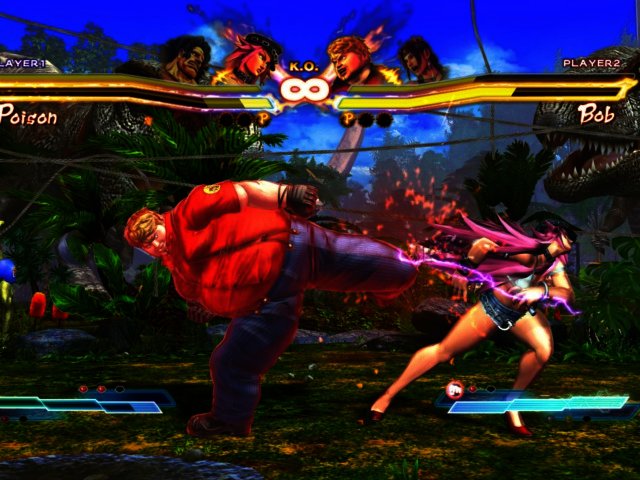 Ey, dude, do you think these jeans make me look fat?

Arcade and Versus modes

After obtaining these kind of mad skills through countless hours, blood, sweat and smashed PS3 controllers, you can head into the Versus and Arcade modes. Versus mode is good for jamming sessions with your friends, as it enables gamers to choose their dream pair of fighters as well as their favourite arena. Up to four players can duke it out for bragging rights.

Arcade mode is the meat of the game’s single player (or co-op with a friend) campaign. Gamers pick their favourite tag-team and attempt to finish this story mode. Unfortunately, Capcom seem to have spent most of the developer budget on the graphics and gameplay engine and gave their kids about ten minutes to come up with a storyline.

The story sees a mysterious (are there any other types) object from outer space, dubbed Pandora, crash-landing in Antarctica. All the game’s fighters are drawn to this object for various reasons, and head off to investigate, encountering their respective rivals on route.

As you can see, there really isn’t much of a story to glue the fighting action together, and if you do want to exploit the little storyline on offer, then you have to pick your fighters wisely. Characters have the most interactions (pre- and post-fight conversations, some of which can be amusing) with their official tag team partners. For instance, players should pick Ryu and his friend Ken, or Heihachi and his Karate-chop throwing pet bear Kuma, to get the most dialogue and up their chances of getting a proper ending upon completion of the Arcade Mode.

This aspect of the game was somewhat counter-productive, since like most people we either wanted to pick our favourite fighters or characters whose styles differ enough to compliment each other, such as the long range attacks of the limb-stretching Indian priest Dhalsim and short range power of Jin. Opting to do this though, seriously limits the dialogue between characters. 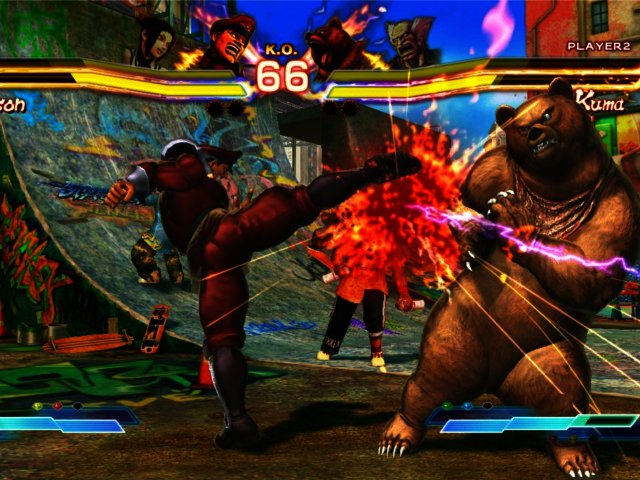 Will you stop kicking me already? I can't bear it.

A gem of a combat system feature

SFxT introduces an interesting gem-based system that spices the fighting action up a bit, since it can allow you to turn their fate around from losing by a mile to winning by the closest of margins. These gems enable gamers to equip their fighters with different abilities that can be activated during a fight for a limited time.

For instance, if you land five successive normal attacks during a fight, the Iron Wall gem will engage. This gem will reduce the damage your opponent’s strikes by around 10% for a period of 15 seconds. Another gem option we liked provides your character with the ability to activated Pandora mode.

This can be used when the match isn’t going your way, since you can only trigger it if your on-screen character has 25% health or less. Activating this mode will actually sacrifice this character and infuse their power into their tag team partner, giving this character a tremendous power boost. This mode only lasts ten seconds, and it you fail to capitalise on this advantage within that period, you automatically lose the match.

SFxT also enables you to customise your fighter, by selecting which three type of gems your chosen characters can activate during a fight. Additionally, players can edit the button presses for performing combos and further customise the look of the characters, by altering the colours of their costumes and skin colour.

Unfortunately, you are limited to about four or five colours to choose from for the costumes and cannot give fighters a totally different look via new hairstyles or eye colours etc. That said, we do appreciate the ability to bring a more unique look to our favourite fighters.

SFxT might not sport one of the most captivating and original storylines, but it does boasts excellent graphics, highly rewarding and challenging gameplay modes and a large roster of some of your favourite characters from the world of video games. If you are a die-hard fan of either franchise, or simply love fighting games in general, Street Fighter X Tekken won’t disappoint. Get the action started for R599.

Won’t keep you nailed to the TV for epic marathon sessions; you can drive 18-wheeler trucks through the holes in the storyline; and not the greatest amount of choice in the customisation feature.

CONS
Won't keep you nailed to the TV for epic marathon sessions you can drive 18-wheeler trucks through the holes in the storyline and not the greatest amount of choice in the customisation feature.
TAGS:
Namco BandaiCapcomPlayStation 3computer and videogamesfighting game
USER COMMENTS